As if the Earth getting destroyed wasn't bad enough, this section of Battleworld has gone to hell...literally.

One of the great things about the Secret Wars tie in books is the chance to revisit past storylines and versions of characters. From what I recall, I didn't absolutely love the original Inferno arc. What really intrigued me about this was the premise of this particular story.

Veering off from the original story, things didn't end in quite the same way. The demons actually won and Illyana Rasputin has been a prisoner of theirs for four years. Where Dennis Hopeless brings us in is a group of X-Men, consisting of Colossus, Cyclops, Jean Grey, Boom-Boom, Nightcrawler, Beast, and Psylocke are making their yearly attempt to try to rescue Illyana. There's something about seeing the X-Men on a more focused mission like this. You can feel there is more at stake and seeing a determined Colossus able to let go against the demons after trying to contain his anger throughout the year. And, as you would hope or expect, there are casualties. If the stakes are indeed higher than normal and this has been going on for four years, it shouldn't be a walk in the park for them.

Javier Garron does a good job capturing the despair of the transformed Manhattan. While I didn't really care for the design of the demon N'astirh, he and the others look as they were originally designed.

On a side note, it was really interesting reading this story with these X-Men right after reading the X-MEN 92 Infinite Comic.

Perhaps it'll be explained but the idea of Colossus and a team of X-Men attempting to rescue his sister every year on the anniversary of her abduction bothered me. It could be possible that the demons may not pay attention or use the same human calendar to mark the passing of time, but you would think it'd be a bit of a giveaway after four failed attempts.

We do see some other X-Men but it kind of felt as if their numbers weren't as vast as they could be. If all of Manhattan had been overtaken by the demons, maybe more X-Men would be on hand to try to stop them?

The Secret Wars series are giving us a chance to revisit past story arcs and different versions of characters. We've seen some books continue with the main feel while others have taken a deep departure. Dennis Hopeless shows us a part of Battleworld where the X-Men were forced to retreat during their battle against the demons. Jumping to four years later, we get to see how they've changed and what their mission is. Javier Garron does a fine job capturing the atmosphere of the transformed city. As the action starts to heat up, we get a pretty interesting cliffhanger that will make you want to come back for the next issue. Things might be bad for the X-Men but it's good for those that want an intriguing story.

Domino and Colossus are an awesome couple.

A promising start I thought. The art was a little funky in spots, mostly when we see Magik's demon form, but otherwise decent. That last page was a thing of glory thought. I know I'm in for the duration.

Decent, but it hasn't hooked me yet...

I am finishing the original story arc and look forward to jumping into this book. (Though I agree that the original arc isn't blowing my mind or anything.)

@renchamp: It's a low point of the Claremont run, but still good.

I thought this was a pretty cool twist on Inferno. All the pieces are in place but there are differences to make it interesting. Colossus is determined to save his sister, but Limbo thwarts him year after year. I'm curious to see that combination of X-men are able to save Illyana because the odds are stacked against them.

Hey Marvel, Collosus´s current costume doesnt suck. Remember that after Secret Wars III/Battleword/whatever name comes after if any is over. Also how come in this universe, there is mutliversion of same characther of same universe in different places. Doom must really like Jean Grey and Wiccan.

I liked the setup to the story but the art, i thought, was weird. I also felt the bright cartoon coloring was in contrast to the dark and gritty story they were telling. I mean the X-men lost and hell and taken over Manhattan. Something like that screams darker world, not bright and bubbly.

I thought it was pretty good. Nightcrawler was fun. I agree that the whole "let's mount an attack at the same predictable time every year" doesn't make a lot of sense. Great to see old-school X-factor-uniform Jean Grey. The art was so-so.

Interesting that they edited the final cover art to make it less salacious (Maddie's shirt) than the first version they sent out. You'd think a book about demons and seductive-witch-ladies who have male concubines probably isn't going to worry about that sort of thing. Original version: http://www.comicvine.com/articles/first-look-at-secret-wars-inferno-1/1100-152116/

are you going to wait til it comes out in print before you review x-men '92?

There's just something that irks me about these characters being fictional in the comic world...

I love Domino and Boom Boom so I really enjoyed this. 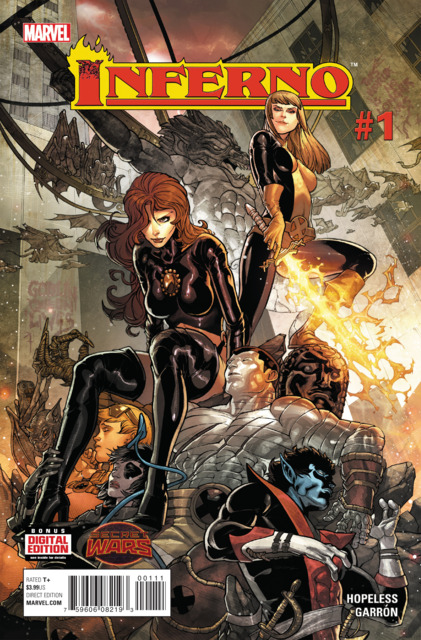