There's a new Iron Man in town. What makes Doctor Doom feel he can take on the role?

What do Doctor Doom and Brian Michael Bendis have in common? They both have a lot of guts and aren't afraid to take risks. You could also say both have their share of fans and naysayers. Since Secret Wars ended, Victor von Doom has been a bit of an enigma. We're not exactly sure what happened to him and why he appears to have turned over a new leaf. That alone is a reason to be hooked on this new series.

Doctor Doom is no longer the man he used to be. With a healed face, it seems his cold shriveled heart may have healed as well. We've seen him offering assistance to Tony Stark in the pages of the recent Invincible Iron Man series. Due to some mysterious upcoming incident in Civil War II, Tony Stark will be...elsewhere. We're not exactly sure what happens to Stark, but the stage will be set for Doom to contemplate his future in the Marvel Universe.

With Doom being such a fascinating character, it's a little worrisome to see him possible do the villain-turned-hero routine. The thing is, Doom never really saw himself as a villain. We don't know everything that's going on in his mind. Also, as great as it would be, a series focusing on a villain can be a little hard to follow. We've also already seen a series with Iron Man as a bit of a jerk in Superior Iron Man.

Here, Bendis is continuing what he's started with Doom in Invincible Iron Man. Doom is getting fleshed out. In a flashback scene at the beginning, the Hood really asks the obvious question: What is Doom's motivation? He had a whole country to command and the power to journey to Hell to save his mother. Seeing Doom on this new journey will be intriguing as we discover what now makes him tick.

The art and color by Alex Maleev and Matt Hollingsworth beautifully sets the tone for this new stage in Doom's career. There's a bit of mystery with this series since you can never be too sure what Doom is up to. The art and color captures this vibe nicely.

There is a lot of unknown elements to this series. Doctor Doom as Iron Man is a weird concept. Seeing the former villain suddenly become, or try to become, a hero would only be compelling for so long. As long as Bendis can continue to shake things up, the character is in safe hands. The other downside is we're left wondering what happened to Tony Stark due to the delays in Civil War II. It doesn't directly harm this title, but you might find yourself momentarily distracted wondering what happened.

What are we to make of Doctor Doom becoming Iron Man? It's a good question which will be fun to see explored. Brian Michael Bendis is exploring a new direction for Doctor Doom. As great of a villain as he may have been, we've seen that angle played out pretty much as far as you could take it in Secret Wars. With Maleev and Hollingsworth, this book is a trippy journey with one of Marvel's greatest villains going in a new direction. There's no telling what will happen next. Those last few pages will definitely make you want to come back for more. 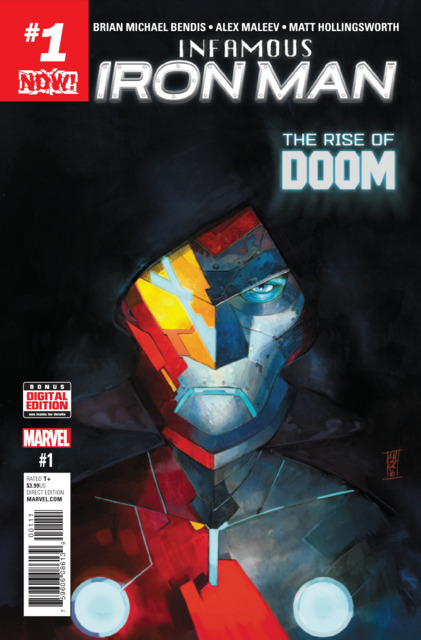