Would you give up your great relationship to become the world's only superhero? That's the challenge Mark is currently facing. Wish him luck!

True love or great responsibility? What is more important to you? It's a question we see superheroes struggle with on a daily basis, but what if it happened to one of us, a completely ordinary comic book fan? That's the question Steven T. Seagle and Mark Dos Santos' new Image series is aiming to ask. Even though it's a subject that is dealt with on a frequent basis in superhero books, the two make sure this journey stands out because of a more fun and comedic tone.

First and foremost, the contrast between Mark and Imperial is really amusing. When I used the word "ordinary" above, I sure meant it. Mark's grammar is very limited and he's... well, not the most motivational and aspiring person around (but he totally makes up for that with his impressive collection of "dolls"). Calling him "average" really is the most appropriate way to describe him. There's just nothing special about him, but, just like many of us, he's lucky enough to have found someone who loves him for who he is -- it's a very relatable element, even if Mark is a little too embarrassing at times. Now, if it was just his adventures, this book would clearly be lacking. Obviously, that isn't the case and the writer bounces his "average and not the brightest around" personality off of the stoic, confident and well-spoken Imperial. The character dynamic never had me laughing out loud, but it's definitely an entertaining relationship between these two and it works well.

What makes the interactions work particularly well are the beyond fitting facial expressions Dos Santos creates. Mark looks every bit as shocked, intimidated, awkward and embarrassed as he should as Imperial looks at him with judgmental, concerned, and even confused expressions. You could take the dialogue out of many of these panels and still get a perfect read on what's going on between the two.

I'm left wondering why Mark won't tell his fiance about what's going on. They're clearly very close, so why hold something like this back? Is there something we're not being told about becoming Imperial that's common knowledge in his universe and that's why he's refusing to tell the woman he loves? If so, it isn't expressed here. I get it's an unreal scenario and it's messing with him, but you'd think if he could talk to anyone about it, it would be her. And this is something that's most certainly worthy of discussion, especially for a fanboy like him.

Minor gripes: we've yet to see why Mark would have to choose between being the world's only superhero and having a relationship. I'm sure that'll be brought up down the road, but it's a little odd it isn't mentioned in here since that's a big part of the premise. We can speculate, but no actual reason is presented. Also, the ending leaves us with literally no idea what to expect because we're still very unfamiliar with Imperial's limitations and what it means to be selected for the role. If the previous scenes haven't won you over that much, it's possible this cliffhanger won't do enough to encourage you to check out the next chapter.

IMPERIAL has a very familiar concept: "average joe" faces a surreal and larger than life duty. Whether your every day kind of person can rise to the occasion and become a hero is something we've seen time and time again across countless superhero stories, but IMPERIAL has enough charm and personality to capture your interest and definitely has a ton of fun with the common premise. I'll absolutely stick around to see where this goes next and it's looking like this title has opened the door to a whole lot of interesting character development. Let's hope it delivers on that potential! 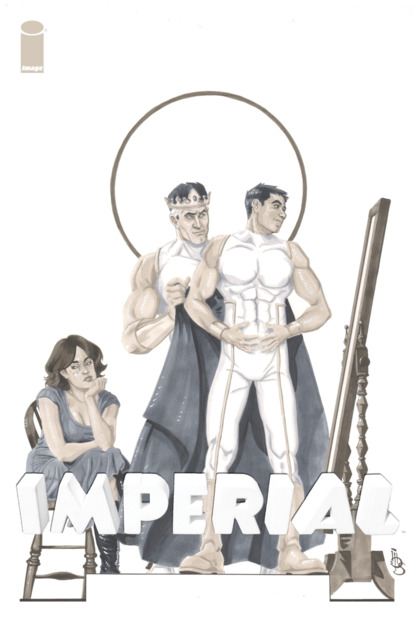