Sometimes characters don't live happily ever after, but you'll be happy you picked up this book.

When it comes to the mind of Skottie Young, you have to wonder if he's just brilliant or perhaps a little...something else. If you're familiar with Skottie's art or writing you have an idea what to expect. You could say his art style is a little on the cutesy side but he takes the cutesy and crams it in your face. This may be a story taking place in 'Fairyland' but it's unlike any fairytales you may have read in your youth.

The story focuses on a young girl namedGertrude. Like many young children, she dreamed of visiting magical places. Skottie gives her that wish with an extremely violent journey. Scared and alone, she wishes to make her way back home. She is told how and given a companion but cut to twenty-seven years later--she's still there. She's aged but her body hasn't. She isn't too happy.

There's so much that is just right about this book and a lot that is so wrong (in a good way). Young doesn't shy away from taking things to extreme places. There is plenty of violence along with some language and gestures unbefitting of a little girl. That's what makes this book so delightful. Just when you think you know how far Young will go, he takes it a little further.

Young's story is compelling. We've seen numerous stories with the lead character going to a fantastical land. It's not often we see the land isn't as magical as you would think. There is a pretty hardcore vibe that is absurd in some ways but it's also what hooks you onto it all. Because it's Fairyland, it feels like the skies the limit. There could be countless areas and regions for Gertrude to explore. The idea of that is a little cringeworthy after seeing what Gertrude is capable of yet you're going to want to see more.

Young's art is amazing. Being a creator-owned book with slightly mature themes, he's allowed to cut loose a little more. While the violence isn't over the top, we do see some brutal scenes and damage being done to characters, Gertrude included. It all has a nice vibrant feel courtesy of Jean-Francois Beaulieu's colors.

It's not often books like I HATE FAIRYLAND come along. You'll be both disturbed and entertained at the same time. Skottie Young comes up with some creative and crazy situations for the lead character. The idea of mixing violence with a fairytale vibe may not be new but you likely haven't seen anything like this. Jean-Francois Beaulieu's colors feel brighter than ever and adds a brilliant shine to some occasionally darker moments. With all the set up complete in this issue, the story is just going to get bigger. There's no telling where the series will go from here. This is definitely a book you'll want to fasten your seat belts while reading. The crazy antics Young comes up with will likely knock you off your chair. 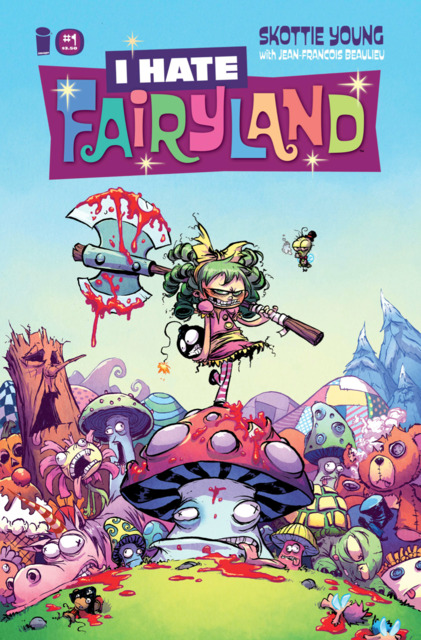