Heroes come in different sizes and shapes. Mark Millar gives us the hero we’ve been waiting for.

When it comes to superheroes and their origins, secrecy plays a big role. With Huck, the secret plays a different role. His secret doesn’t belong just to him, it belongs to the entire town he lives in. Living in a small town, Huck appears to be the guy working at the gas station that some might describe as slow. Most residents in the town describe him as special. The secret is in what Huck can do. He has superhuman abilities that set him apart from others and he uses them to perform selfless good deeds wherever he’s needed. In other worlds, he’s a true hero.

In this first issue, Mark Millar introduces us to Huck and the people around him. We do get a glimpse into where he came from and how he ended up in this town. The focus is on what he can do and how far he’s willing to go to do his good deeds. It’s a fascinating look at a small town’s biggest and noblest secret.

In most comics from today, you don’t really see characters like Huck. It’s not often we see a hero with such extreme goodness inside. The concept of a flawed hero has been prevalent for some time. Huck’s only flaw is his need to do good. In some ways, it’s like he’s in his own world once he sets out on accomplishing an act. This is something that could become a problem as he’s not fully aware of the dangers he’s putting himself in or the price that could be required in being such a hero.

Rafael Albuquerque’s art perfectly captures the essence of Huck and the world he lives in. We see how he lives his life and what others think of him. You immediately get a sense of the goodness contained within Huck. Dave McCaig’s colors add to the vibe of the story and helps convey the innocence of the moments along with the dangers that appear later.

In a time where we’re subjected to a lot of negativity and hatred, HUCK comes in like a beacon of hope. Huck is the hero we’ve been waiting for. Mark Millar and Rafael Albuquerque have introduced us to a hero unlike any other that is special in many ways. Living a life to only help others, he’s placed his biggest secret in the hands of the town he lives in. You might feel a slight need for more in this first issue but everything is set up nicely. You'll get such a warm feeling reading HUCK and will likely fall in love with him before you reach the end of this first part. 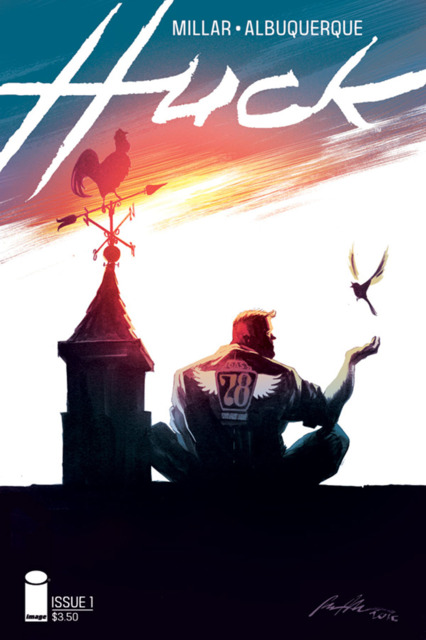