This is not the Howling Commandos you're used to.

There's a new team of Howling Commandos ready to be unleashed upon the Marvel Universe. As first seen in S.H.I.E.L.D. #9, Dum Dum Dugan is back commanding a team full of monsters. Oh yeah, Dum Dum is an advanced LMD as well. This group of monstrous agents will be sent on missions too dangerous for regular S.H.I.E.L.D. agents and there's no telling how things will go.

Frank J. Barbiere does a great job making this gathering of characters work. My main concern is I want this team to go on different sorts of missions that we wouldn't see regular S.H.I.E.L.D. agents on. They can and should be sent to the dark corners of the Marvel Universe. I would imagine this is a team they wouldn't necessarily want the public to be aware of.

That raises another issue--how the team members are being treated. Because of their nature and the threat they could pose, they're all being kept locked up beneath a facility at Area 13. Going on missions allows them to "stretch their legs." Hopefully there's some more motivation for them to keep doing the right thing. We are seeing the team is far from perfect. That adds to the entertainment and makes it feel more real rather than having a perfectly polished squad of soldiers.

Brent Schoonover's art with Nick Filardi's colors is great here. With characters such as Zombie Jasper Sitwell, Manphibian, Orrgo, Hit-Monkey, and Teen Abomination (among others), the key is to make the characters look good, fierce, and not too comedic. Too often we've seen monstrous characters that come across as a little laughable because of the art and colors. Schoonover and Filardi have sold me on these characters being here. Even Hit-Monkey, a character I'm overly fond of, looks great. I'm also hoping they (and Barbiere) will sell me on Teen Abomination, something I really disliked in SUPERIOR IRON MAN.

One of the things that distracted me was when the Commandos were on their mission. Without giving too much away, some people had become infected by an object they needed to recover. I kept thinking what if these people could be cured or have the effects reversed. The team was just slicing into them in order to accomplish and carry out their mission. The other concern was Dum Dum loses a body again. He's going through them pretty quickly.

HOWLING COMMANDOS OF S.H.I.E.L.D. is off to a great and fun beginning. We have an odd mix of characters which really opens the door for some crazy adventures and that big feeling of the unknown. Despite not even liking a couple of the members, I can't help but be excited to see where this series takes us. Frank J. Barbiere has a lot of room to give us some exciting stories that could take place away from the regular madness of the Marvel Universe. Brent Schoonover's art is great and Nick Filardi's colors make the 'monsters' look great instead of overly bright or comical. We're seeing some really good new #1s from Marvel this month and HOWLING COMMANDOS is yet another one those. It's has a great vibe going which gives us something we haven't seen over and over again. If you're looking for something different, this definitely falls into that category in a good way. 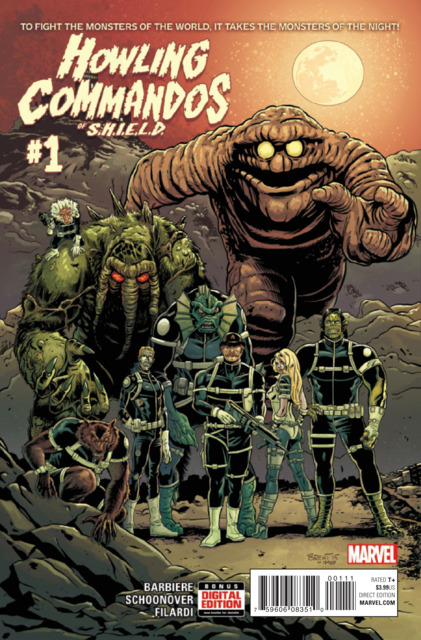