This may be Hawkeye's annual but let's not forget Kate Bishop also went by that name. Get ready to see what sort of trouble Kate and Pizza Dog get into.

Kate Bishop is a great character. She's tough and smart and knows what she wants. In the current HAWKEYE series, we've been seeing Clint as sort of a mentor to Kate. The problem is Clint is getting deeper and deeper with his destructive behavior. There's only so much Kate could put up with. We saw her take Pizza Dog and leave, this is where the annual picks up.

Making her way to the West Coast, we do see a little more about Kate's personal life. Despite her rebelling nature, she's still had an easy life. We get the chance to see what she can do when it's all taken away.

The story also picks up from an encounter she had in a previous issue of HAWKEYE. It's the perfect story as a follow up was definitely needed. Too often it seems villains simply forget or get over being defeated or humiliated by the heroes. It's wonderful to see one that can keep and hold a grudge.

There are some really nice scenes courtesy of Javier Pulido. I totally dig that cover. Matt Hollingsworth's colors help make this feel like the sort of HAWKGUY story we would expect. The combination of the two along with the scene layouts makes this a visual treat as well.

I like Kate. I really do. The hard part with this issue is there really isn't much Clint to the story. It's supposed to be his comic but the focus is on Kate. Yes, as I mentioned, Kate also went by the name Hawkeye before. It may make more sense for this solo story to take place here rather than in the main series but you would expect more Clint in an annual for his series. The story here was really really fun but just felt like it was missing something.

Pulido's art is really good except there were a couple moments Kate's face looked a little different. Maybe it was her nose? Not quite like I remember it.

These obviously are minor complaints.

Annuals can sometimes be tricky buys. When you're enjoying a series, the idea of an extended issue is hard to resist. The HAWKEYE Annual takes a minor turn in the formula by not focusing on the actual main character. Kate Bishop is a formidable character in her own right and is worthy of a grand solo story. Javier Pulido's art and Matt Hollingsworth's colors are true to the style of art we've been seeing in the main series. Even though this story stems out of recent events in the series, it's still one that can be enjoyed on its own. If you're looking for a great Kate Bishop kicking butt story, this is the comic for you. Action, humor, twists and suspense -- what else would you expect from Matt Fraction? 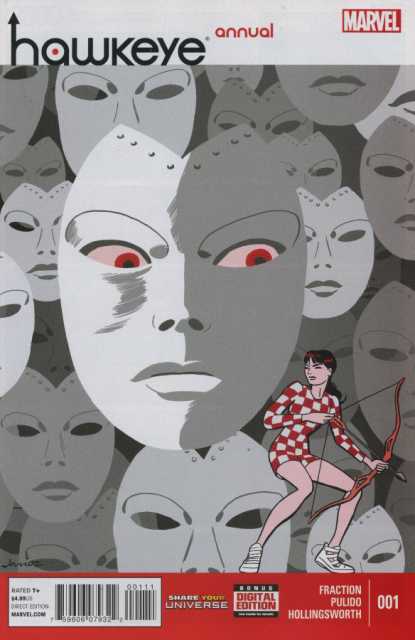