Kate Bishop's adventure in Los Angeles has sort of felt like one standalone story after another so far, right? Well, this issue changes that and Matt Fraction proves there's a much bigger story underway over on the West Coast. Not only is he able to shine the light on "the Cat Food Man" (who has an awesome real name, by the way), but this opens the door to a much bigger plot and brings a new layer of seriousness to this side of the series.

Diving into "the Cat food Man's" story means jumping into some exposition heavy material, but Fraction is able to make this an interesting experience as he floods it with intriguing elements and, of course, makes it thoroughly entertaining with bits of his signature style of humor. A couple of times the dialogue feels a little bit off, but that's hugely outweighed by the amount of times it does deliver and creates a nice sense of levity. On top of fleshing out a character and teasing a whole new plot, Fraction makes sure to keep the adventure full of more than a handful of legitimately pleasant and fun moments.

I won't lie: I can't see an artist topping what David Aja brings to this series. However, Annie Wu does a great job offering a somewhat similar style while also putting her own unique touches here and there. Where she differs from Aja is facial work, and her work tends to standout the best when creating disheveled characters... and that's something that is absolutely not in short supply in this issue. The first time you see a rundown Kate is hysterical and totally fitting. That's not to say she only thrives when the people are a mess, though. No matter what the expression is, she does an able job making it come to life and gives these characters a clear personality. Colorist Matt Hollingsworth is then able to fill each of these scenes with their own distinct set of tones that really add to the atmosphere Fraction's creating. It's a little much with some of the lighting, but aside from that minor complaint, everything else gave the book a bold set of enjoyable visuals.

I had some small problems here and there with the chase sequence. From a standard shot for Kate being called "impossible" to tourists apparently causing them to swerve when there's two lanes (the dude isn't watching the road during a high-speed chase?), it felt like a little bit of a missed opportunity to include some really solid action in the issue.

As much as I like Kate's side of the story, you can't help but feel like it's not as compelling as what's going on over in New York with Clint. It's cool to see Fraction's building up this side of the narrative, but as of right now, I just don't find it to be quite as exciting as the other issues.

HAWKEYE #18 begins to really ramp up Kate's story in the City of Angels. It may not be as powerful as what's going down with Clint over on the East Coast, but it's still thoroughly engaging and remains well-written. Fraction's able to make huge strides in the story without neglecting the laughs or fun, and Wu's character work fills these scenes with so much personality. I can't wait to see the follow-up to the cliffhanger with Clint, but in the meantime, this is a legitimately enjoyable read and has me curious to see where Kate's story will take her next. 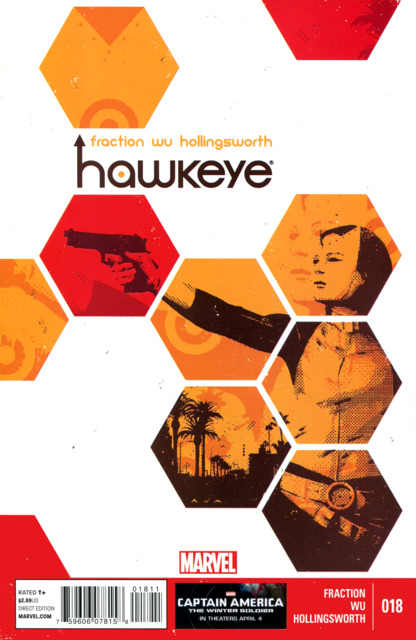