Harley Quinn, Amanda Conner, and Jimmy Palmiotti. Put the three together and you know things are going to get nuts. Conner and Palmiotti have been to a number of shows during their careers and this is their chance to show everyone what Comic-Con is like, or would be like, if Harley Quinn was actually there.

It should be noted that this is indeed a special one-shot issue. It's not part of the regular series, despite fitting into that continuity. Some of Harley's friends are on hand but the main focus of the story is on Harley, trying to break into comics. Throughout the story, you'll see some familiar sights, if you've ever attended a show, or if you've watched the numerous amounts of footage captured each year. It's a very tongue-in-cheek issue. Conner and Palmiotti poke fun at themselves, DC Comics, and their competition. It's all in a fun and friendly fashion.

Along with Conner on a few pages, we get a big list of artists helping depict the story. Again, if you've ever been to a show or even to San Diego around the convention center, you'll get a kick out of seeing it all here within these pages. As long as you are prepared to have some fun and not take this issue too seriously, you'll have a good time while reading.

As cool as it is seeing the various artist's take their turn fleshing out the story, it does cause the flow of the story to feel disjointed. Some styles work well with each other. Others offer a slightly harsh transition. It shouldn't be a surprise because the issue was billed as containing several cool artists.

For those that have never been to a Comic-Con, they should be able to enjoy the story as well. There is an added benefit of actually having been there to share the laughs. Conner and Palmiotti put in a lot of situations we've seen or experiences (in an exaggerated way, of course) and some of these jokes might not click with others.

There have been several comics that brought in the idea of Comic-Con into their stories. Many fail to really work. Amanda Conner and Jimmy Palmiotti deliver a fun and humorous take on the show. The wackiness of their take on Harley works perfectly with the situation they've set up. Joining the two is a long list of talented artists. The downside of multiple art styles is it interrupts the flow of the story. If you've ever been to a Comic-Con or wish you could make it to one, this comic gives you a slight idea what you could expect. It's a story meant to poke fun at the concept and industry in a friendly way. The plot may not be something they'd use in the actual HARLEY QUINN story but it's not meant to. Plus, who doesn't want to see what happens when Harley runs into a Batman cosplayer? 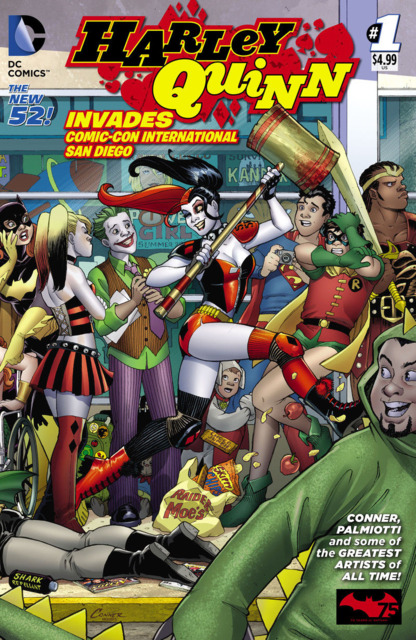