Answers will be revealed. Can Harley survive the assassination attempts long enough to find out?

Harley Quinn may not be the sanest comic book character around so why should her comic be? Amanda Conner and Jimmy Palmiotti continue the wacky and deadly adventures of Harley Quinn in her own little corner of the DCU. Making a return appearance is her bestie, Poison Ivy. Ivy is helping Harley track down the identity of the mysterious person that put a big hit out on Harley but first, why not take a trip to the beach?

If you're looking for answers the story moving forward, you're in luck. But in true Harley-fashion, it won't be an easy task. There are plenty of funny and violent moments. Harley is definitely making up for the slight lack of violence in the last couple issues. Sure there still was some before but nothing like this.

Chad Hardin's art continues to fit this book nicely. Bravo once to everyone involved in making this happen. It's definitely at that point where you don't want to think of someone else doing the interiors for this series. There's some nice color courtesy of Alex Sinclair and Paul Mounts. Whether it's at the beach or in the middle of a brutal attack, it all looks good.

As much as I enjoyed the issue, something felt a little off to me. We still have plenty of Harley shenanigans but maybe it got a little too dark for what I was expecting. Harley's condition during part of the fight was typical Harley but also felt a tiny bit too far fetched.

Normally I'm in love with the color but perhaps it's having two colorists that makes it look a little different.

Harley's story is moving forward. She may get some answers as to who put out a hit on her but that doesn't mean her problems are over. Amanda Conner and Jimmy Palmiotti have made this a series where pretty much anything goes. It's always great to see Poison Ivy here but we also see another member of Harley's supporting cast step up to offer assistance. If you've been waiting for some answers, you will get them. Chad Hardin's art is fantastic and the colors by Alex Sinclair and Paul Mounts makes it shine even more. Don't miss out on Harley's crazy adventures. 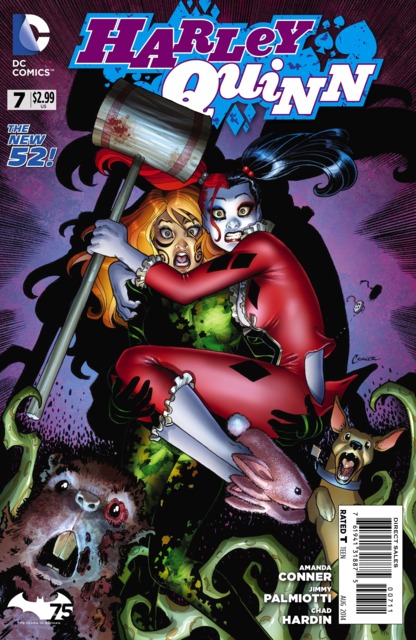