Harley’s settlin’ inta her new digs! But there’s trouble a’brewin’ with some fwuffy kitties and puppies. This calls fer some outside help of the tall, green and POLLEN-Y variety!

Okay, my original idea was to do the entire review in Harley-speak, but...no, no I’m not going to do that. This comic is a breath of fresh air in the down, dirty and dingy New-52. Don’t get me wrong, there are PLENTY of great stories being told, but there’s a definite tone of grimness and misery that permeates a great deal of it. But with Amanda Conner and Jimmy Palmiotti’s names attached to the Writer credit, you definitely know you’re in for some laughs. This isn’t to say that Harley Quinn is a kid’s book or even that it’s particularly tame, it’s definitely neither of those things and the writing is generally sharp and plays to the strengths of the character. I was reticent last issue about dumping her alone in a new place and just suddenly ginning up a supporting cast for her, but Conner and Palmiotti have given her a great cast of characters to bounce off of, each with their own bizarre quirks. Each who wouldn’t think twice about having someone like Quinn as their landlady and it seems to gel in a really organic, interesting way.

The linework by Chad Hardin and Stephane Roux does an absolutely stellar job of communicating just how over-the-top this world that Harley inhabits is and how violently (sometimes literally) her mood can swing. From puppy-dog eyes to grimacing menace in the space of a few panels and it all feels earned and effective. The sheer amount of fluidity from one panel to the next is also an amazing sight to behold. Better still, despite having two different artists, the colors by Alex Sinclair and the similar styles ensure a very cohesive look and tone from one page to the next to the point that I could barely tell when the shifts were happening, and that’s something to brag about. The colors, in addition to helping maintain tone, also help make this one of the best looking books, using a diverse, sharp, VERY bright palette. It’s unusual to see a book that ostensibly Bat-character themed that takes place mostly during the day and it’s very refreshing.

The “talking” beaver. I don’t really see the point of him. At first I thought he was going to be a straight-man for Harley’s insanity to bounce off of (the stoic, serious Cable to her manic, homicidal Deadpool), but that role is mostly filled by her supporting cast. He’s also the fuel for some fairly obvious jokes, which is I think the reason he’s in there. The rest of the writing is sharp enough to sustain, and I like a good filthy pun as much as the next guy, but this seems like it was shoehorned in for that and nothing else. As good as the faces are across most of the issue, there are one or two places where the close-ups look awkward or overdone (as in too much linework) and I think most of them took place at the shifts.

These are minor quibbles in what is still a highly entertaining and witty book that puts our best gal in some preposterous, but hilarious, situations. Poison Ivy makes a welcome appearance, there are puppies and kitties galore and Harley is likable enough, the violence slapsticky enough, that she comes off as a bit more cartoonish than viciously brutal. Tonally, it’s a great melding of her original Bruce Timm/Paul Dini animated series appearance and her harder-edged New-52 persona and well worth checking out. 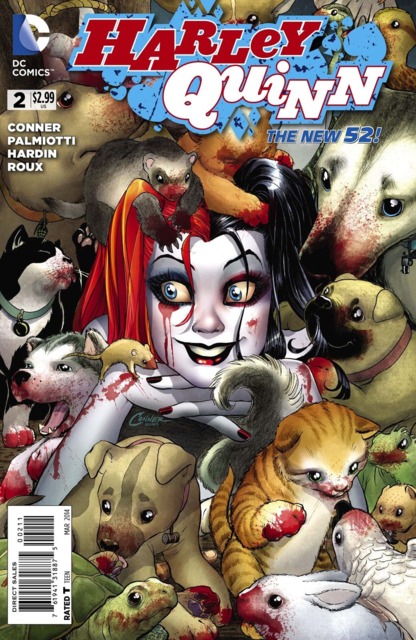