Harley is out on her own and the world better watch out.

It's safe to say this is not going to be your average series. With Harley Quinn as the main character, you're never going to be sure what will happen next. We don't usually see villains as the lead character in comics. Harley is a psychopath. She will kill without a second thought. That could be the tricky part for some readers.

Despite her choice in how to solve certain problems, you can't help but be drawn to Harley. She's always been a fascinating characters with different layers to her personality. Amanda Conner and Jimmy Palmiotti have also done a great job in making her a little more human. You can't help but find Harley a little adorable even though she could brutally kill whoever she's sharing the panel with.

Harley has been bequeath a building which gives her a new home. Along with her new residence, she's also gaining a potential new supporting cast. This is something that will add more to a comic focusing on a crazed character. Harley having others to interact with allows for us to see some of the different sides to who she is.

Chad Hardin's art is great. He has a great style that makes the story flow smoothly and adds a nice amount of detail to the backgrounds to make this feel like a different corner of the DCU. And what about Alex Sinclair's colors? I'm practically mesmerized with each panel. I love the way the colors flow together and it's great seeing such lush backgrounds rather than plain and simple ones we often see in comics.

There was concern over Harley breaking the Fourth Wall (she does not do it!). My concern is over the other "voice" she hears. It's not a big deal and does further illustrate Harley's fragile grasp on reality. We'll have to see how much of a role it plays in future issues.

Harley with a supporting cast could be interesting but could also be tricky to pull off.

The bigger concern is we have a series focusing on a killer. Is Harley a nice person? Well, she's shown to only harm those who (big quotes) might "deserve" it. This might be something some readers may have issues with. Hopefully those readers can see how fun and not serious this is meant to be.

Harley can be a fun character. We've seen her portrayed in different ways and thank goodness Amanda and Jimmy have a great grasp on her. This isn't Harley going on missions for the Suicide Squad or Harley pining over the Joker. This is Harley in her own little corner of the DCU. She now has her own place with (gasp) some responsibilities. Throw in the roller derby angle along with Chad Hardin's art and Alex Sinclair's colors, this is a great comic to make you feel warm inside for the holidays. (Even if this has nothing to do with the holiday season). Why not buy two issues - one for you and one for a friend. It's a good time for everyone. 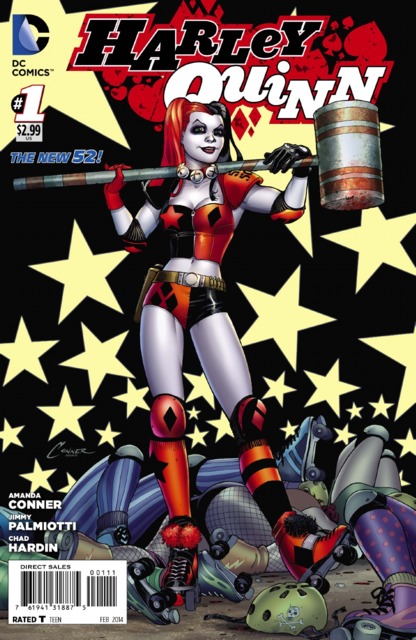