The secret is out: Toyo Harada isn't a good guy. Now that everyone knows what he really is, Toyo gets to embrace his villainous side and show the world he isn't someone they can control.

Joshua Dysart's HARBINGER has been doing a great job balancing character development and pure spectacle. And, if you've been following along, you know the team just went through a very rough ride and the team -- well, Faith and Torque aside -- have gone their separate ways. Now comes the tricky spot in the Harbinger mythos: following-up with each individual and preparing us for what comes next in the Valiant universe. In the wrong hands, this could be a total bore as it awkwardly jumps from character to character and tosses mountains of exposition at us. Luckily for us, Dysart continues to prove he's a talented writer and a great fit for this team of rich characters.

This opening chapter covers a lot of ground. Torque and Faith are mostly glossed over (you can catch them over in ARMOR HUNTERS: HARBINGER #1), but the spotlight on the remainder of the cast feels fitting and most certainly entertains. Seeing Toyo Harada finally act the way he wants to is a thrilling and even frightening development for the character. He no longer needs to hide his intentions and let's just say he makes a very smooth transition into "true villain" mode. Watching him no longer need to dance around politics and save face is a great change of pace for the character and something I'm very excited to see more of. As Toyo's narrative goes for setting the stage and dropping our jaws, Peter Stanchek's tale is a much-deserved follow-up on how recent events have impacted his mind and motivation. It's understandable he'd revert to a darker place and, considering his powers, Dysart does an interesting job showing how he blames himself while trying to cope with what has occurred. It's scenes like this one that show just how character-driven this franchise can be. Meanwhile, Kris Hathaway's emphasis isn't quite as emotional as the rest, but that's because it's geared towards moving the narrative forward.

Visually, HARBINGER: OMEGAS #1 is a fascinating ride. From impressive displays of Harada's power to Peter being down in the dumps, each page by artist Rafa Sandoval, inker Jordi Tarragona, and colorist David Garcia Cruz are able to strike a fitting set of panels for the book's tone. The opening is bold and bright as the focus is on might and raw power and swiftly transitions to darker shades and strong character work when the mood becomes more depressing and even a little twisted. They do a phenomenal job delivering a heavy dose of shock value when the book takes a surprisingly graphic turn, too.

Just a heads up, this opening chapter attempts to be new reader friendly but I don't recommend it as a jumping on spot at all. You won't fully appreciate the impact and emotion behind these events and you'll likely feel in the dark with a few characters and remarks.

Love HARBINGER? Then this should be a more than obvious purchase for you! Dysart continues to fill the script with great character moments, big displays of sheer spectacle, and crafts an overall narrative that's loaded with tension and intrigue. This is going to be a critical limited series for this franchise and this first chapter does a more than commendable job hitting us with all of the buildup and character depth. As expected, this is must read for HARBINGER fans. 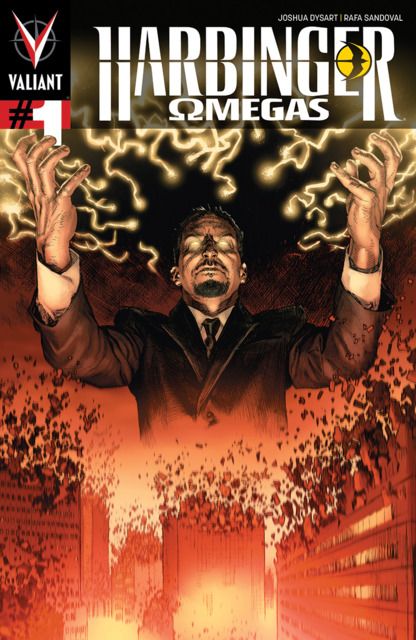