Sinestro and his Corps are ruling the universe through fear!

It's weird to think that throughout Robert Venditti's time writing Green Lantern that he's never done a story centered around Sinestro. This issue truly defines who Sinestro is now and what his motives are. He wants to rule the universe using fear, which has always been his goal, but Venditti puts a nice stamp on it in this issue.

What's really working with this issue is that it feels like a Green Lantern book. That may sound silly, at first, but Green Lantern books need to have this feeling of science-fiction, order, with an element or fantasy and lore to really work. At it's core, it's not a super-hero book. It's a space adventure about policing the universe. That's what this issue is all about. Also, there's some developments with Parallax. We won't spoil that here though.

If you've been keeping up with what's been going on with the Green Lantern Corps, then you know they've been in another universe for the past year, while Hal Jordan was a renegade. Minor spoilers: the hook at the end of the issue is that the Green Lantern Corps is back. This raises more questions than anything else. What's going to happen when they run into Hal Jordan again?

The art team of Rafa Sandoval (pencils), Jordi Tarragona (inks), and Tomeu Morey (colors) is exceptionally solid on the issue. The work is consistent and drags the reader into this world. Any Green Lantern book needs a strong colorist, and Morey is the person for the job. His work on the contructs, in particular, is really brilliant. The contrast between the gradual shading and flat colors there really fit the book, while making it all pop out. These are some great looking colors.

While this issue works great for both old and new readers alike, I find myself utterly confused to why Sinestro is old now. The character mentions that his body has taken a great toll, but there doesn't seem to be an actual reason to why he's like this. Surely, this was explained somewhere else,

Overall, the first official issue of this series is a solid start. The Lantern books haven't been on the same page for quite some time, so it's nice to see Venditti and company bring everything back together. There is easily enough of a hook here to keep readers coming back, and it's leading to some interesting places. Plus, the Green Lantern Corps is finally back. Everything feels right again. 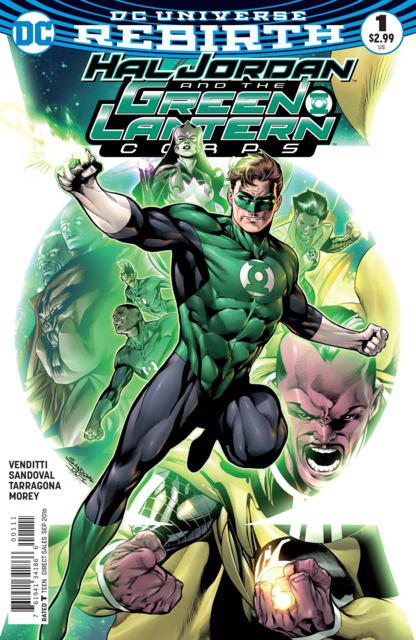