Guardians of the Galaxy #8

Between Earth and the cosmos, the Guardians of the Galaxy desperately hold the line on Thanos’ attack.

Brian Bendis is writing one of the most underappreciated big books on the shelf in Guardians of the Galaxy, and it’s the way he’s writing it that makes me love it as much as I do. Bendis has a habit (some would call it bad, others would not) of writing ping-pong word balloons and conversations that seem to intentionally bounce back and forth while the art remains somewhat static, and while this book still has a lot of dialog, very little of it feels like its done in this style and all of it has an amazing, well paced feel to it. He’s fleshed out, and in some ways redefined, characters that have been having a decade long renaissance, and he’s still finding new and exciting ways to make it seem like they’re just holding on by their fingernails. I’d be remiss if I also didn’t mention that Neil Gaiman still gets a consultant credit on the book and I’d also be remiss if I pretended I knew exactly what that meant. The book has been a bit more staid and nuanced over the last few issues, but I can’t tell if that’s due to Gaiman’s influence, or an intentional matter on the part of Bendis.

Francesco Francavilla covers the entire span of the artistic duties and, much like with his one-shot work on Batwoman, he’s an unlikely fit to this book. Again, I’m a big fan of his work, but his muddied, dark visuals might not have worked the best in a book that takes place in space and features a talking raccoon (or rather space alien who resembles an Earth raccoon and will BLAM! MURDER YA if you get the two confused) and sentient, ambulatory tree, but here we are. Due to a combination of his style being incredibly versatile and Bendis being a real artists’ writer, this issue presents a much more down-to-earth story of stealth where Francavilla’s brilliant use of light and shadows creates a moody, atmospheric sense of dread and desperation. The link to Infinity is definitely there, but tenuous at best, so fans of Guardians as a standalone series won’t be left out.

There’s really nothing not to love about this issue. It’s well-paced, well written, well drawn and fits perfectly into the tone and setting of both Guardians and Infinity.

The change of art is a little jarring at first, but it quickly becomes the highlight of the book and an extremely compelling reason to give it a look. The characters are amazingly well defined, to the point that you could read standalone snippits of their dialog and pretty easily identify who said it (and not JUST “I AM GROOT!”) The dynamic of this team strikes a great balance between “we don’t like/trust one another” and a fully functional one to the point that the “adversarial” banter doesn’t seem forced or shoehorned, but like a natural part of the story. 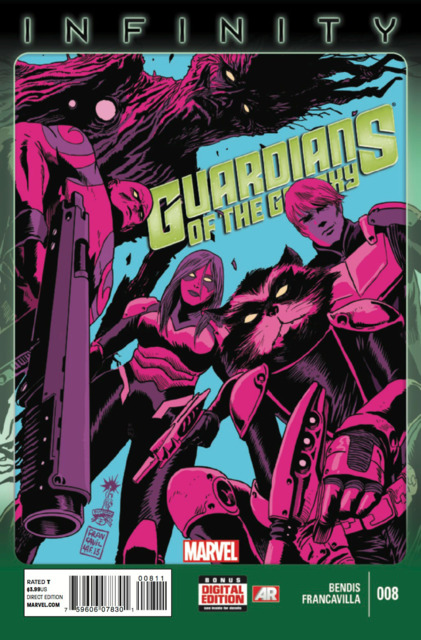