It's the conclusion of the Lost Army and a battle to save Mogo!

The Green Lanterns battle to save Mogo's life, as the planet is being terraformed with a giant light-war happening on the surface.

LOST ARMY offered a lot of promise and had a great start, but it comes to a bit of a crawl in this last issue. Whether it's because the book was suddenly changed to a five-issue mini-series, instead of an on-going or whether this is just how it was supposed to play out is unknown, but it truly feels like this whole story and this battle could have been expanded out to six issues and it could have made for a more exciting story.

The overall story isn't bad and isn't great. It's straight down the middle, but it is a bit frustrating to see that there's potential here for something bigger. As stated earlier, I wouldn't put the blame on writer Cullen Bunn. This feels like he was cut short, and Bunn is easily capable of doing some great work, like with SINESTRO, LOBO, and the plethora of other comics he writes. We do get some fun battle sequences and everything is wrapped up nicely, which is really a big set-up for the next volume of this story: GREEN LANTERN: EDGE OF OBLIVION.

The issue does seem to tie into the end of the current GREEN LANTERN arc by Robert Venditti. John Stewart sees what looks like to be Hal Jordan closing the rift between universes. This could be the moment Relic and Hal shove Black Hand into the Source Wall, closing the rift. The ending does show promise in the next volume of the series though, as the Lanterns are not back to their universe and still trapped in the one previous.

Jesus Saiz does some great art and color on the issue, and while there are a couple of times where the art feels a tad stiff, like John Stewart on the two page spread right off the bat, but overall, it has a nice feel to it and while the shadowing and lighting can be extreme, I really like that effect and it gives this book a cool style. All-in-all, Saiz's colors work for this book because a bright GL book filled with contrast is what this story needs.

GREEN LANTERN: LOST ARMY feels like it ended too early and the last issue could have easily been stretched to two, giving that final battle a more epic feel. The overall issue isn't bad, but it is a tad underwhelming and can be a bit bland. The concept of this book is fantastic and the opening installments were a great read, but this final issue left me a tad disappointed. 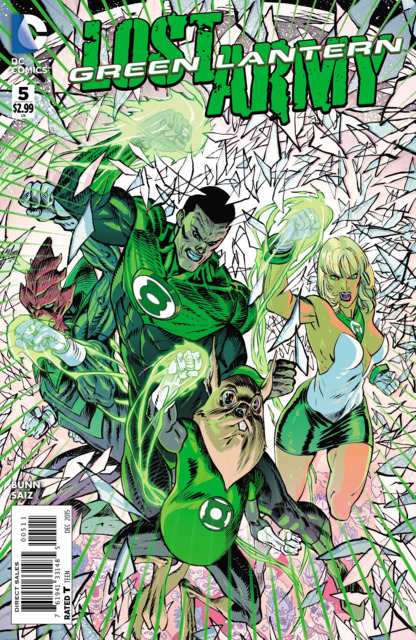