Relic begins to strike at each spectrum's champions, starting with the most underestimated: the Blue Light of Hope.

Justin Jordanâ€™s tale of the massive, cosmic entity Relicâ€™s quest to rid the universe of itâ€™s ostensible protectors plows on without resting as the Blue Lanterns are targeted. We learn a little bit more about Relicâ€™s motives, but more questions are asked than answered and we get a taste of his incredible power. Jordan has a lot to juggle here and he does so with aplomb and vigor, writing each of the primary characters with just the right amount of focus while paying service to the over-arching Lantern storyline of the spectrum entitiesâ€™ illness. Relic is stoic without being dispassionate or detached, Kyle remains as snarky and headstrong as ever without being arrogant, Carol is focused and quick-thinking without being reckless and the Blue Lanterns are serene without being boring, itâ€™s a fascinating thing to watch all the players get so much attention and characterization when there are SO many of them in a given panel and page.

Speaking of that, Brad Walkerâ€™s pencils are absolutely stunning. Every character is distinct and every panel is dynamic and clear. This is one of those issues that could have been a silent one and still had it crystal clear whatâ€™s happening from moment to moment and overall. Andrew Hennesseyâ€™s inks bring that sharp focus home, keeping order and pace strong and cutting as well as highlighting Wil Quintanaâ€™s gorgeous colors. When you have a title that focuses on something called â€śspectrum warriors,â€ť youâ€™d best have a good colorist and Quintana has been incredible over his run on this title. The colors practically leap off the page and they do an amazing job of highlighting the action and communicating the tone.

As interesting as Relic has the potential to be, Iâ€™m feeling a lot of redundancy from the First Lantern. Heâ€™s either immune to, or can channel, the spectrumâ€™s powers, he wants to destroy them for reasons they donâ€™t understand, but he certainly does (and he isnâ€™t sharing), and a great deal of his tone and presentation echos the previous event. There are occasional panels that donâ€™t flow particularly well from one into the next and whose characters react strangely based on what happened in a previous one.

The final page of this book is absolutely devastating and has me salivating over what the next issue (well the issue AFTER Villainâ€™s Month) will bring. This issue continues the greatness that has been brought to this book and I continue to recommend it month after month. Iâ€™ve always been a huge fan of Kyle Rayner and, even though Johns gave him plenty of credit in Rebirth, always thought he was overshadowed by more serious-minded Green Lanterns (yes, even Guy Gardner), so to see him get not only his own title, but royal treatment like he hasnâ€™t seen since he had the Ion power is an absolute joy. Minor quibbles aside, this is a great book for anyone interested in a little sci-fi mixed with their superhero story, and with a very different, more fantastical, tone from the other Lantern books. 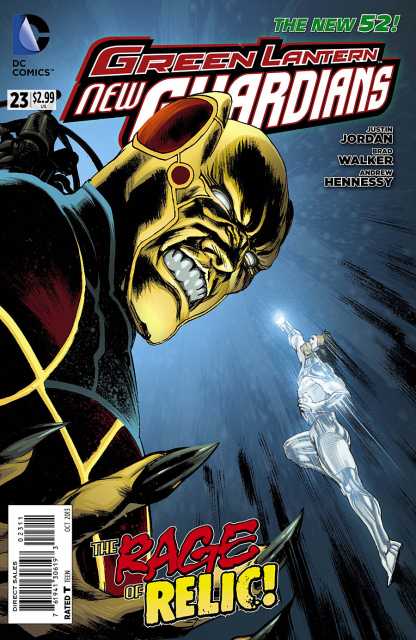