Korugar is gone, Kyle Rayner is on his last legs, and Sinestro is not happy.

I love Kyle Rayner. I really do. Maybe it’s because I more closely identify with an introspective, artistic type than some headstrong authority types, maybe it’s because I think imagination should be just as important to a Lantern as willpower, and maybe it’s because he’s got an awesome name, but there’s something about him I find eminently likable and Tony Bedard has done a great job of steering him in this book. His run has been one of the most emotional of the Lanterns, or at least the Lanterns with their own book, and that continues here.

In the wake of the First Lantern’s assault, Kyle is on his last legs, unable to cope with the new and different realities that were unleashed upon him to drum up feelings to fuel the emotion vampire’s reign of terror across the universe. As the White Lantern, he was an even greater source, and thus was even more crippled by it. Carol Ferris (I’m still loving her new costume) gets him on his feet and they try to contact the other New Guardians to no avail, but Sinestro is still active and it’s when they arrive at his location in deep space (Korugar SHOULD be there, but they come out of hyperspace into some kind of asteroid field! It's not on any of the charts...) that they see the horror that the First Lantern has wreaked on Korugar. Simon Baz also appears on the scene with B’dg in tow to introduce the new Lantern to everyone. After a brief scuffle, Sinestro has the white ring and is determined to bring back his home planet and its people, but the ring rejects him as being unworthy, choosing Baz instead, but even his incredible will can’t bring an entire planet back, so it’s left to the ring’s original host to try. Without giving anything else away, I’ll say that the book definitely ramps up the emotion and ends with a great, and threatening, moment. Also, and this is just a personal preference, but I still hear Sinestro with David Warner’s one-of-a-kind voice and this book does a great job reinforcing that, especially Sinestro refusing to even address Kyle as anything but “alley-rat.”

Andres Guinaldo handles pencils with Raul Fernandez on inks and Wil Quintana on colors, and all of them are absolutely firing on all points, this book is gorgeous. From the vast reaches of space to the characters’ distinct costumes, everything just looks absolutely perfect in both macro and micro (I’m looking at you, space squirrel!) scales. This book, like Green Lantern Corps, is also a fairly good stand-alone, so if you haven’t been following the other First Lantern books, but are a fan of Kyle, feel free to pick this one up.

The gatefold covers have begun to be less about “shocking moments” within the book and more about “lying to the reader” and this is one of the more egregious ones. Simon Baz does, indeed, become the White Lantern, but it lasts less than two pages, and while it wrings some very good emotion out of it, it’s hardly a “WTF moment.”

Kyle recovers just a little TOO quickly from the First Lantern’s emotional attack. His compatriots are still completely out of action, but all it takes to get Kyle back in full working order is for Carol to help him to his feet Gears of War-style and have him shake it off. It cheapens what he’s been through, as well as the power of both the First Lantern AND his compatriots, that he’s able to just shrug it off so easily.

Green Lantern: New Guardians feels like it's often relegated to third-tier status within Lantern books. It stars one of the most controversial Green Lanterns, it tends to be very isolated from the rest of the GL universe and stories, and it has a very large supporting cast, but these things are also, to my mind, the book's greatest strengths. Out of all the books to be a part of these last two cross-overs, this one is the easiest to just pick up and read without needing to really get into the previous books. Bedard also does an amazing job of juggling the giant cast, the unlikely team-up of Kyle Rayner and Carol Ferris illustrates this best, but giving each and every character plenty to do and a lot of growth. Cosmic events are the most difficult to have personal, introspective character moments in, but Bedard absolutely accomplishes it while also not skimping on the giant space battles. A great issue that strikes a great balance. 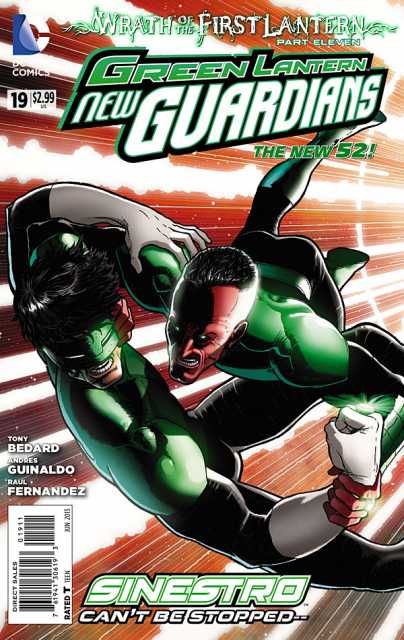