Just when victory and peace was within grasp, the Uprising rages on one final, fateful day!

Picking up minutes before GREEN LANTERN #33’s incredible cliffhanger ending, we quickly get the reveal on what was behind John Stewart’s frantic call to Hal Jordan, warning him the war wasn’t over. And it is one shocking, jaw-dropping reveal. Without getting into too much detail, something taken easily for granted has been turned entirely on its head with this reveal, AND the Durlan plan to take the form of the Daxamites and overrun the universe is back on. VAAAAAAAAAAAN Jensen gets the last word on the Uprising event, and he’s using it to great effect in this action-packed issue that starts explosive and doesn’t let up for a single page. I’m usually quick to praise Jensen’s character development and crafting, but that all takes a backseat to some intense, wild action scenes of the Corps battling a seemingly unstoppable foe. We get our fair share of shocking moments, even beyond the issue’s initial twist, and the battle isn’t without loss, but by the end we have everything from a changed status quo to a clear vision to where John will need to go next.

Bernard Chang returns to the title to send off this arc in classic form, and he does not disappoint. The linework on this title is razor-sharp and the action is fluid and kinetic, all critical things in an issue THIS action-heavy. I especially love the diversity, whether from writer, artist or both, that is leant to the Lanterns’ constructs, each one substituting for dialog as fast ways to establish and reinforce character traits, both human and alien. The backgrounds are incredibly detailed and do an amazing job setting a sense of place and blocking, but we still get that stylistic flourish of a pure red background (often accompanied by a completely white character) during moments of especial peril and that leads us, quite naturally, to Marcelo Maiolo’s colors. The colors in this book are not only apropos and detailed, they’re perfectly suited to each of the settings with subtle tints accompanying every panel that help bring the sense of place home, but also set the tone for the issue overall.

A twist of this magnitude can be a tricky thing to pull off. Too obvious and it loses its impact, but leaving no hints, or hints that are TOO subtle, and it comes from nowhere, losing much of its impact in retrospect. Last issue didn’t lie to us, which I appreciate, but the identity of the final durlan still feels like it comes from nowhere and with very little suspicion.

This might sound nit-picky, but the situation with Von Daggle back on Mogo has me perplexed. He looked like he was making some kind of incredible sacrifice to give the Lanterns access to durlan DNA scanning. Partially because of what happened to him and partially because there must have been some reason he'd waited so long to provide them with it. He swore he'd never wear a ring again, but he also apologizes to Salaak as he enters the chamber, claiming "There's no other way." Yet in this issue, he's completely fine and I can't imagine why he had to wait so long before deciding on this course.

The plot may not hold together perfectly, and I may not fully embrace where it seems like it’s going, but I still say it’s a very good conclusion to a great cross-over. While it seems like future issues may not be returning to Stewart's recruits, I can't hardly hold that against the book NOW (and haven't). The ending is the hardest part of a story to land, and Jensen, Chang and Maiolo were still able to deliver a satisfying, consistently good finale. Whether Stewart’s recruits are front-and-center for the next storyline, I’m still onboard to see where he goes next. 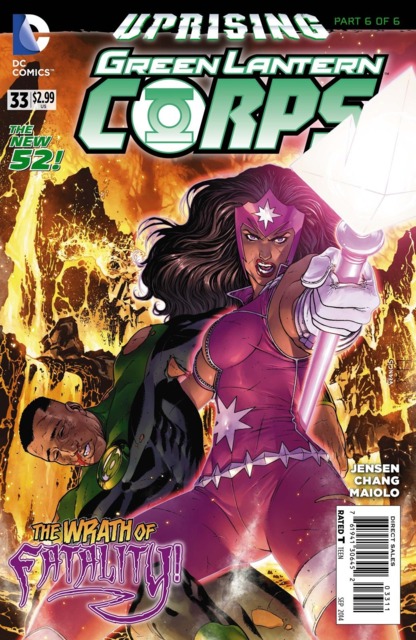