John Stewart goes on a rescue mission to save the Lanterns replace by the durlans. But he finds far, far more than he ever intended.

Picking up shortly after the events of Green Lantern #31, John Stewart pursues the rings that the false Green Lanterns wielded to infiltrate the corps and plan a devious sneak-attack. He arrives with his squad, but discovers someone far, far more shocking in the prison’s sub-basement. I won’t reveal who it is, but it’s someone who’s been conspicuously absent from the title for far too long and someone I’ve been wondering about for awhile. Van Jensen bringing that character back certainly brings a smile to my face, and the rest of the issue is an intense, breakneck jailbreaking story. The issue actually only gets its main cast at about the halfway mark, the first half being dedicated to the Lanterns beginning their escape by themselves. The two stories coalescing is completely organic and some of the best action in the series so far, and anytime we get to see John’s “practical” constructs, it’s a great time. It’s even a good crossover issue as reading Green Lantern helps get more out of it, but it’s by no means a requirement. This issue stands amazingly well on its own. This is definitely an action-over-character issue, but after so much buildup, it’s good to see some good ol’ fashioned ringslinging.

At the helm of said slinging is Bernard Chang and his cartoonishly ultra-detailed linework is absolutely gorgeous down to very fine detail. Of which there are MANY. There’s a great sense of motion and incredible force behind the Lanterns, but there’s also some intense, incredible violence throughout the issue. At the most brutal of those, we’re treated to Marcelo Maiolo’s shifting palette of red and white, freezing the moment in time. It’s a strange effect for a medium that, of course, is literally a series of frozen moments, but with Chang’s animated style and Maiolo’s bright, bombastic colors, it has the intended effect every, single time. This is also, I think, the most we see it used in a single issue, and it still stings every time.

We’ve come somewhat afield from the new direction of GL: Corps and that is John Stewart training the new recruits as well as being a more traditional “space cop,” the original concept of the Corps. I get that a crossover’s plot needs to be served before the plot of its individual issues, but I’m really hoping we get back to that sooner rather than later. This is a good crossover, but I want to see the books really differentiate from one another in terms of plot again.

A great issue if you’re into the Uprising crossover and a great issue if you’re just reading Corps. John Stewart may not take center stage until later, but the underlying focus on the Corps as a whole is most definitely intact and does a great job of spotlighting some of the more obscure Lanterns across all of the Corps. The action scarcely lets up, breath can scarcely be caught, and the ending warms the cockles of my fanboy heart. 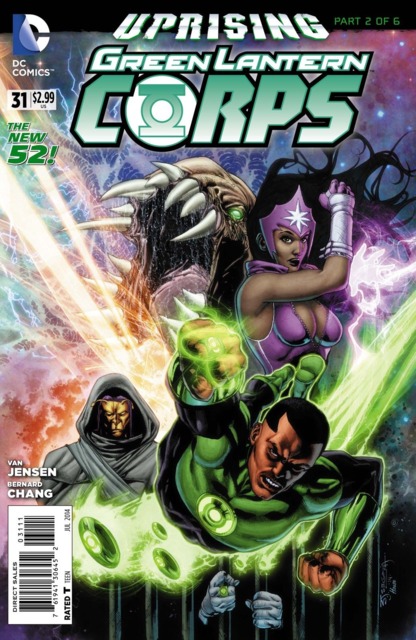