The Corps seeks out the one man who can give them insight into the Durlans: the AWOL covert Green Daggle. But how does one track down a shapeshifter?

John Stewart and Fatality are spearheading one of the most interesting comics in the DCU: leading a troupe of ex-cons that would have died with Oa had the Lanterns’ morality not triggered and saved them from the planet's destruction. Now they’re helping serve their time not in a cell, but by helping track down a rogue, shapeshifting Durlan Lantern that holds the key to turning the tide in one of the fronts of the war against the Green Lanterns. Meanwhile, the remaining forces on Mogo continue to rebuild and remember, but while Salaak and Soranik visit the remains of Oa, something sinister befalls them. Van Jensen flies solo on the writing and delivers a fantastic outing in this issue. Everything from the bazaar that Daggle is found in to the rebuilding efforts on Mogo are wonderfully written, displaying the full range of characters that inhabit the Corps. From Kilowog to Soranik and everyone else, the personalities of the Corps are front-and-center, making the stakes all the higher because these characters are easy to sympathize with and quickly come to life under his hand. There are a few scenes, mostly involving the character from the classic Mogo Doesn’t Socialize one-off Bolphunga, who actually gets some fairly great moments showing that just because he’s comedic relief, doesn’t mean he can’t be awesome.

Bernard Chang is back on fulltime linework and oh how lovely it is to have him. The action in this book remains glorious and fluid, going from one panel to the next effortlessly and distinctly, never losing the thread nor the narrative. In fact, it’s even more hard-hitting than I remember it being in previous issues, and that’s a welcome change to this newly hard-hitting book. Another contributing factor is doubtlessly the colors by series regular Marcelo Maiolo that do an absolutely amazing job of framing the action, particularly in certain panels where the color completely desaturates into red and white, making the moment all the more punctuated. It’s the comics equivalent of “going into slow-mo” and it works every, single time. It also brings a certain visual flair to the proceedings, breaking up parts both mundane (with sudden action) and action (with enhanced action). And the reveal on the final page is nothing short of a shot of undiluted comics awesomeness.

There’s a scene on Oa that involves Kilwog and while it's a generally well-written scene, the whole thing seems entirely superfluous. There's also a line from the big alien himself that sounds weirdly out of character, but somehow MORE in character than he usually is. It's easy to forget (and I did until the issue brought it up) that Kilowog was a scientist on his home planet. Which makes his whole R. Lee Ermy-drill sergeant characteristics a little baffling. It only sets up the scene with Soranik and Salaak, but that scene stood just fine on its own and could have been transitioned directly to. The later scene on Oa is well earned, but it doesn’t justify the first. I like the characters involved with it just fine, but it seems like the interaction could have been combined in the second portion on Oa.

This book is just plain great. It’s got more of a personal touch than the core Corps book (see what I did there?), despite its larger cast, and I feel like we’re getting to know these characters, both old and new, very well. The whole notion of recruiting Sciencell prisoners on a kind of parole is an absolutely fantastic one. I’ve always been a fan of “siege” stories or stories where the central characters are under attack, and this one has not disappointed. 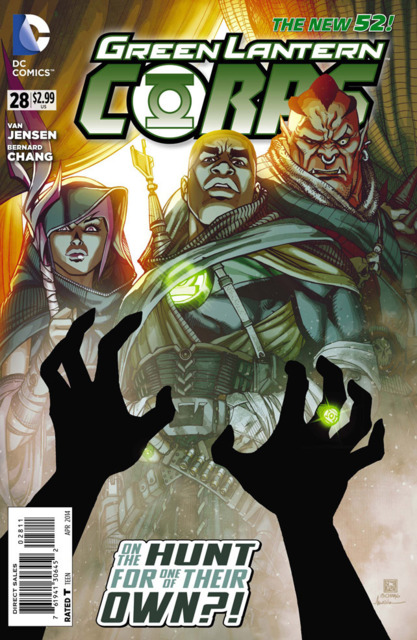