John Stewart and Fatality confront an unknown threat while Salaak and Soranik try to hold the Corps together with all six of their combined arms.

Green Lantern writer Robert Venditti impressed with his debut on Green Lantern last week, and he’s given a “co-plot” credit on this issue of Corps, but the credit for this startling debut has to go to Van Jensen, at least from a writing perspective. I’ve often complained, vocally, that GL Corps is less a book about John Stewart and the various other members of the Corps, and more the Guy Gardner Experience feat. Green Lanterns, and right off the bat Jensen makes it clear whose book this is: and there’s no one answer. John Stewart is on half the total pages with the other half being alien Green Lanterns or, my favorite, new recruits. Van immediately addresses the shortage of Lanterns that recent events have left by plucking four new recruits from vastly different backgrounds and at least one of them answers a question I’ve always wondered about: if the rings have a sense of morality. Certainly Sinestro’s subjugation of Korugar indicated the rings prize willfulness over goodness, but that was AFTER he became a Lantern. At least one of the new recruits reinforces that notion (and another doesn’t even WANT to be a Green Lantern). I honestly can’t wait to see what’s in store for all the new recruits as they all seem absolutely fascinating.

Art, meanwhile, is in the capable hands of Bernard Chang with Marcelo Maiolo on colors, and what colors and art they are! An anime-inspired look that doesn’t sacrifice realistic proportions is a rare sight to see in comics, but it’s also absolutely stunning in this context as it makes for thrilling, unique visuals. The line work is crisp and well-defined and Chang keeps immaculate panel control, it’s never difficult to see what’s happening on a given page.

If you’re looking for Guy Gardner, you really are going to have to wait for Red Lanterns, he makes not one appearance in this book. There’s also an urgent situation on Oa that only gets teased but is actually addressed in the mainline Green Lantern book, so that feels like a SLIGHT cop-out. Neither of those things are even close to being major flaws, this is an amazing issue and a fantastic debut.

Van Jensen has introduced four all-new characters from four COMPLETELY different backgrounds and races, and I honestly cannot wait for the next issue to see what comes of them. Additionally, Green Lantern Corps seems to be getting back to the heart of what the Green Lanterns are: space cops! As much as I loved Johns’ run, there were so many times when a sweeping, epic space opera obfuscated, or forgot, that the Green Lanterns aren’t a standing army, they’re galactic police and though Johns didn't write all the Green Lantern books, the events that he wrote permeated all of them. There are so many unturned rocks for that context and that idea, that I am absolutely thrilled to see someone tackling them. 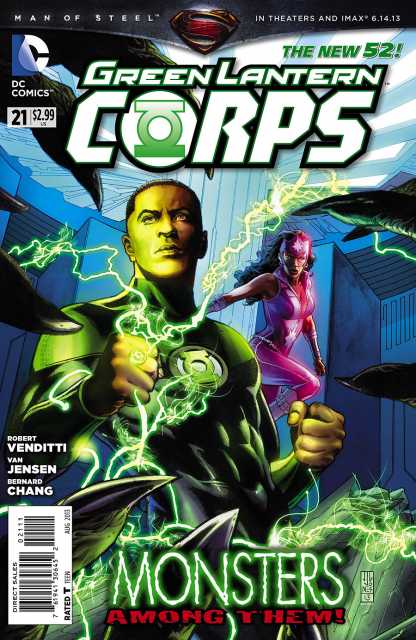