The battle against the First Lantern has ended, but who remains to pick up the pieces?

SPOILER WARNING: DC released this book, which is an epilogue to Wrath of the First Lantern, before the resolution to that series, which isn’t due out for two weeks in the pages of GREEN LANTERN #20. If you don’t want to know AT ALL who made it through and who didn’t, READ NO FURTHER.

This issue of Green Lantern Corps wraps up Tomasi's extensive run on the series, and is clearly Peter Tomasi's love letter to Guy Gardner, showing what the most volatile of Earth’s lanterns gets up to in the wake of the First Lantern’s apparent defeat. Since taking over the series, Tomasi has focused hard on writing Gardner with a bit more depth and pathos, the character originally began as a parody of American jingoism and xenophobia toward the Soviets during the Cold War, as more than just a frothing, raging beast who lashed out at colors and shapes. Maintaining a connection, however temporary to the Red Lanterns, was still a great idea and a great way to revisit some of his more vicious sides. This is an issue all about downtime as Guy decides he’s going to get his priorities in order after dealing with a VERY long-running threat to both him and his family back on Earth. He decides that he’s going to take some shore leave, kick back, spend time with his family and take in all the best that Earth has to offer for three whole months. I’ll leave it to our readers to see how that goes, but Tomasi goes out on some strong characterization for Gardner that leaves even me hating him less. Not the least of which has to do with his hilarious run-in with... “Aquaman.”

Fernando Pasarin and Scott Hanna hold up their end art-wise, showing the absolute power of the cosmic forces at work, the faster than light speeds that they travel, the emotional torment and joy on their faces, the barely contained power they possess and, most importantly, their joy at relaxing and enjoying life for however long they can. The art in this series has always been top notch across the board, from action scenes to chatty ones you can tell who is whom and what they’re feeling even without reading the dialog. There’s even a montage in this with each panel representing different days and somehow, within the one or two still images, there’s a great sense of history and movement. You feel like you know what’s preceded each panel.

Did I mention this issue predates the actual conclusion of Wrath of the First Lantern by two entire weeks?? That’s simply unacceptable as this is tied very, very closely and intimately with that issue, not the least of which is because those most passionate about the series as a whole will want that issue before this one. Without knowing exactly what happened, there are a few characters completely unaccounted for that characters in this issue would want to know the fates of, events we don’t fully understand, and while the focus is squarely on Gardner, the issue could have and should have been delayed.

You might also notice that I’ve apparently forgotten to mention the book’s co-star John Stewart, and to that I say: so did the book. John gets a grand total of TWO pages, which is three fewer than Kilowog and Salaak (sometimes one or the other) get. This book isn’t called “Guy Gardner and the Green Lantern Corps,” but it really should be. Guy dominated the 0 issue, has been the focus since Third Army, if not before, and that continues in this issue where we see still MORE of his family (who we already saw plenty of in Issue 0 AND his First Lantern tie-in, among others). It’s to Tomasi’s credit that he’s made Guy so likeable, but it’s been at the expense of a very interesting supporting cast. The alien Green Lanterns barely make appearances in New Guardians or the core title, so this is supposed to be their book to shine.

I complain about a myopic, almost tunnel vision that Guy Gardner gets in this book, but it’s still an entertaining book, and an incredibly well-drawn one to boot. But I have a hard time looking past the fact that it’s become much less of a team book and much more focused on one single Green Lantern, who also happens to be the one I find most obnoxious and unbearable. The reason he and Stewart work so well together is that Stewart is there to keep a level head and look at the things objectively and intelligently while Gardner acts on instinct and flies off the handle. Without that grounding, he’s left to his own devices and that’s just not as interesting. That combined with the completely backwards release schedule makes this one hard to recommend to anyone not already heavily invested in the series and character. 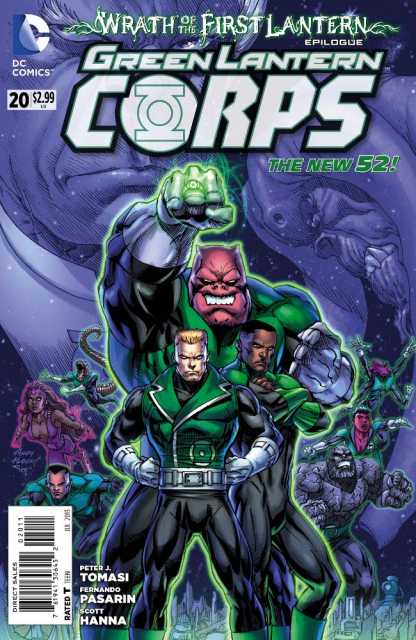