Green Lantern Annual #4 - In the Gray

When DC returned from CONVERGENCE, Hal Jordan has been on the run from the Green Lantern Corps, since he stole Krona's gauntlets. However, the GLC is no longer in this universe, so what happened in those final days when Hal took on the Corps?

Writer Robert Venditti offers up an interesting story that didn't really need to be told, but works well within the Annual format. It doesn't progress the main story featuring Black Hand, but it does give readers insight into those days between the present and when Hal stole Krona's gloves.

The issue essentially gives an answer to the question "How powerful is Hal with Krona's gauntlets?" The answer is "very." The issue jumps back and forth as present-day Hal tells Trapper and Virgo the story of his final days seeing the Corps. Overall, it's a saddening issue as the reader comes to realize that Hal, although a fugitive, really misses those he considered his friends. Venditti reestablishes the fact the Corps is his family and even though Virgo and Trapper are with him now, it's not the same.

In addition, there's some pretty awesome fights while Hal takes on the Corps. Everyone is treated to the power of the gauntlets, which is immense and more powerful than most fans realized, which leads to a scene of Hal in a gigantic construct of himself, demolishing the Corps.

The preview pages of this book looked great, but pushing forward, the art is inconsistent and all over the place. Pascal Alixe has an interesting style that is either some of the best art I've seen this week and at other times, it looks like someone else is drawing it completely, trying to ape his style.

Some of the most inconsistent things lay within Hal Jordan's face and hair. Within the span of one page, all taking place in the same time period, at the same location, Hal goes from having bangs and a Prince Valiant haircut, to having evenly long hair, parted down the middle. Hal's jawline and cheeks change during that time as well. It's attention to detail like that which will make or break an artist. Alixe has proven himself in the past to be a great artist, but GREEN LANTERN ANNUAL #4 is a story that feels rushed to completion. Luckily, the colorwork of Tony Avina helps mask some of the problematic scenes. Avina does some fantastic color work during the pages he and Alixe work on together.

In addition, Martin Coccolo does some pages in the issue as well, which is a bit of a shocker considering his pages aren't a separate story, and his style, is such a huge contrast to Alixe's. Coccolo is no stranger to the characters of the Green Lantern part of DC Comics, and his work is solid and does the story justice. However, it would have been nice to see just one of these two artists work on the whole book.

All-in-all, GREEN LANTERN ANNUAL #4 is decent. For those who want to know a bit more about Hal before the Corps disappeared, this is a solid read. It doesn't really add anything to the current arc, but there are some threads at the end of the issue that will most likely be picked up later. The biggest problem with the issue is the inconsistency in the art. It feels rushed and there's lots of tiny bumps in the road which are a huge bummer considering that Pascal Alixe's style is pretty fantastic. If you're really into Green Lantern, I'll mildly recommend this to you. 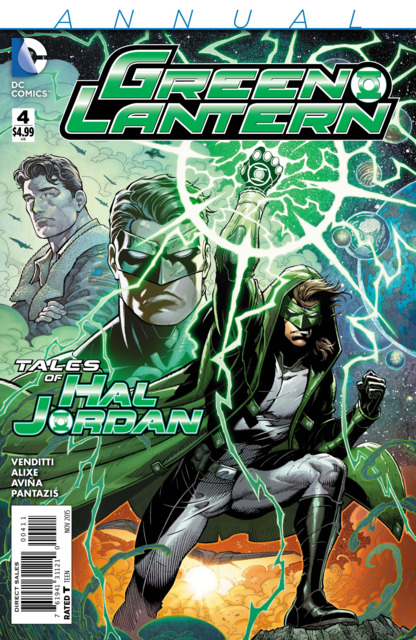