It's the end of the arc. Will it really be "Lights Out" for all the Lanterns and the Universe? The next phase is set up and new directions are laid out.

Everything is on the line. With the different Lantern Corps running low on energy and Relic determined to wipe them all out in order to try to replenish the universe's reservoir, this is the end and beginning. The Lanterns need to set aside their differences for one last stand against Relic.

This is a great time for the different characters to shine on their own. Each character, Kyle, Guy, John, Hal, Carol and the rest of the Lanterns all play their own role. You might be surprised the decisions and outcomes for some.

For a big event, this is important. Robert Venditti introduces a new status quo for several characters and Lantern Corps. Sometimes it takes a decimation in order to kickstart something over again. The result of one character's sacrifice has definitely set the stage for more to come.

Sean Chen's art is pretty amazing here. It all looks so crisp and smooth. Andrew Dalhouse's colors gives it all the sheen it needs and deserves.

While there are some changes, some weren't too earth-shattering. Many of the characters return to where we'd expect or know they were headed. The biggest shock was in the loss of Oa in the beginning of the arc. What about Relic? Will he win? You can get an idea where things will end up.

Lights Out came and shook up the Green Lantern universe quite a bit. We'll have to see how the repercussions affects everyone in the months to come. We do get to see some great moments with the different characters but there weren't as many big and crazy changes as you might expect. Sean Chen's art and Andrew Dalhouse's colors is a great way to end the story. Now is the time to pick up the pieces. If you don't read this, you will be missing out. 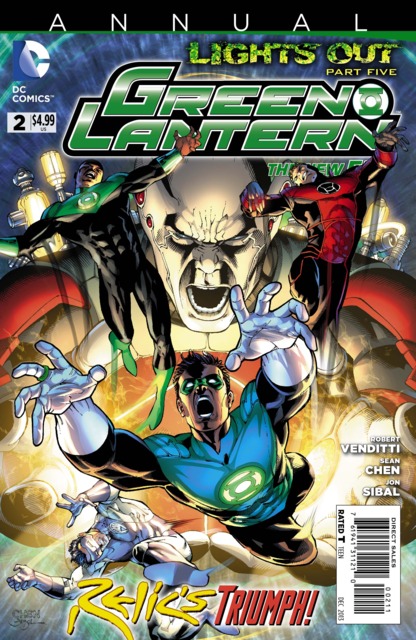