Hal Jordan is the most wanted man in the galaxy!

GREEN LANTERN hasn't felt this different since Geoff Johns' REBIRTH. While this series, as well as the last one, has been a book about Hal Jordan as a member of the Green Lantern Corps, issue #41 is much more just about Hal Jordan and what his new place in the universe is, which is a tad confusing, and it's about establishing Hal as a renegade, which he became after stealing Krona's gauntlets.

First and foremost, Hal Jordan's new look is awesome. Artist Billy Tan, inker Mark Irwin, and colorists Alex Sinclair and Tony Avina put together a brilliant looking splash page that made the teenage side of me weep. Yes, Hal Jordan's new look is super 90s, and I love it. He has the trenchcoat, long hair, and a belt with poaches and while normally, I'd be super-judgey about this, for the role Hal now plays in this book, it's a perfect fit. Their work, as artists is really consistent and moves the book forward.

During RED LANTERNS, we got to see the Red Lantern Corps fly around in a spaceship. Here, Hal has his own ship as well, with his own A.I. called Darlene. Again, a new element is intergrated into the book and it really works, especially because the gauntlets have a mind of their own and don't always work the way Hal wants them to. Writer Robert Venditti is turning this book into more of a space adventure over anything else, which is something that has been lacking at DC.

The ending is pretty nuts and gives a lot more meaning to the title of the new book GREEN LANTERN: THE LOST ARMY. Where in the heck does Hal go for here? Where the heck did the other lanterns go? It's not the most shocking cliffhanger, which is fine, but what it does well is have a question sitting in reader's minds that they will want answered.

The reader has to make a lot of assumptions about Hal's journey in order to piece together the big question from this issue: "why is Hal doing what he is doing?" We're left to assume, much like the show Renegade, that Hal is for hire, to do odd jobs, like bring people in. Essentially, Hal is a bounty hunter, of sorts, minus the killing, but the book doesn't give too many clues about that.

The new direction for GREEN LANTERN is bold and unique. It's quite the departure from where the book was at pre-CONVERGENCE, but it's a really interesting direction. The creative team is spinning this book into something completely different. It's not the Hal Jordan we're used to, but let's face it, this character has been through some insane changes over the past 30 years, from Parallax to The Spectre to dead... twice. The one flaw with the book is that the reader is left to assume a bit too much about Hal's place, but aside from that, this was one tremendous first issue. 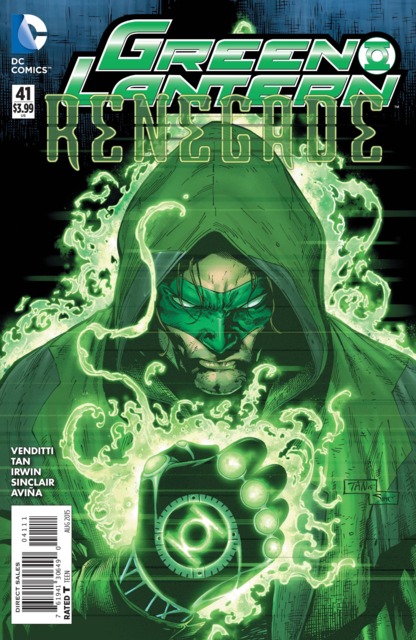