The Lanterns head back to Mogo and face a villain who feeds on emotion.

Hal fights Agarushnawokliag, who feeds on willpower, brings him back to Mogo, fights him again, with the help of some other Lanterns, Hal has a drink with his brother, and then there's one heck of a cliffhanger.

Fans of the series that have been keeping up with all the news know exactly what's coming next, Godhead. In this next event, characters from 4th World will be heading into the Green Lantern books. The final few pages of this issue are that reveal, and it's laid out extremely well and gives readers just enough to get pumped for the upcoming story, even though they have to wait for October.

There's some really nice moments in this issue that focus more on Hal's family that break up the event madness GREEN LANTERN had since the latter part of Johns' run and into Venditti's. Hal and his brother share an intergalactic adult beverage and talk about their lives, and it's written incredibly well and even though these two are on another planet, the conversation feels real and natural.

Three different artists on this book, and while it's obvious when they switch, the styles are similar, so it's not a shock to the reader, and what's really helpful is that Alex Sinclair did all the color work, which is wonderful. Billy Tan worked on the opening scene, and as always, he puts out some top notch artwork. His action sequences are full of life and place the reader right into the story. He was easily the strongest artist here. Martin Coccolo did the larger chunk of the interiors, and his style is a bit more realistic and down to Earth than Tan's. Both styles work well and tell the story of Hall Jordan well.

The issue is pretty much filler as well as a bridge to the next arc, which starts in October because of the who September Futures End month. The bridge is shaky, at best, and because of a few very interesting/bizarre decisions Hal makes here, the focus of the issue is a bit all over the place.

Hal is fighting Agarushnawokliag, who feeds on emotion, including willpower. After Hal beats him, Hal brings Agarushnawokliag to Mogo... a living lantern that has willpower streaming through it. Hal comes off like a bit of an idiot here, bringing a character which gets stronger with more willpower to a planet that is essentially all willpower. Obviously, we all know what happens next.

Now, maybe I'm a bit jaded because I loved Simon Baz's introduction and Venditti has said Baz is coming back in this issue, but Baz's appearance here is pretty forgettable. He has two lines of dialogue in the issue and is basically a stand-in. It seems his appearance here was more about moving the chess piece to the next space and to be around characters delivering expository dialogue. It was a bit of a let down.

GREEN LANTERN #34 is an alright issue. It feels like merely a filler issue with one hell of an ending. There are some moments in here that simply don't make any logical sense, but there's also a lot of heart here. It doesn't offer the reader too much other than a glimpse of what's to come in October with Godhead. It's not a bad issue, but not one you have to race to the LCS to get. If you want a bit of the antagonist's motivation for the upcoming story, pick this up. Overall, it's just ok. 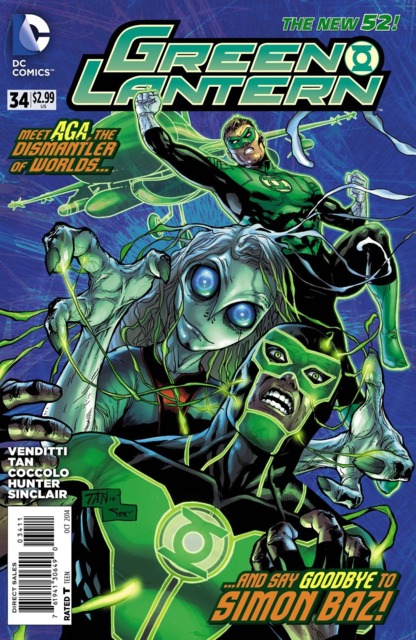