The war effort just seems some mopping up, but that doesn’t mean the durlans don’t have more cards up their sleeves.

Uprising has been an amazing storyline, considering we’re only on part 3, even if the story of the war itself has gone on a bit longer than that. It feels like a much, much longer event/series, but I mean that in a very good way. We’ve gotten a LOT of content out of a few issues and Robert Venditti isn’t letting up as this issue gives the reader even more. Without giving anything away, the Khund may have wanted to consider different allies as the durlans are now all but abandoning the war effort after the latter unsuccessful siege of Mogo. But they DO have some LOVELY parting gifts for their ersatz allies. Hal Jordan is still getting his footing, but he’s definitely learning fast and not just about leading the Green Lanterns. Hal takes an especially critical prisoner and interrogates her to great effect, even doing a bit of detective work. The Durlan plot revealed is truly a horrific one, and we get an amazing cliffhanger to end the issue.

Billy Tan’s pencils in close-up are truly a sight to behold. The level of detail and emotional expression are fantastic, especially in an issue where such things are critical. This isn’t an especially action-filled issue, and Tan does an amazing job with both characters and setting during the downtime, making each location look fascinating and distinct. Rob Hunter’s inks bring out the finer details, emphasizing the strange and wonderful characters that populate this universe while Jaime Mendoza’s colors are sharp and striking, giving a sense of lived-in realness to the universe.

While the closeups look great, a lot of the far shots are flat with the characters lacking detail. The action comes off as stiff and overly posed rather than fluid and in the moment.

If you didn't know what a Daxamite was before this event, you’d better have read GREEN LANTERN CORPS before this issue, because they have NO interest in telling you. I understand that in these crossover events, there tends to be a certain assumption that previous parts were read, but that isn’t an entirely fair assumption if the reader is subscribed to one but not the other. There’s also a twist near the end that I appreciated, but if I hadn’t had previous knowledge of what, exactly, was involved with it, I would have been fairly confused.

The Uprising storyline has been a highly compelling one, and the developments this issue seem content to keep pushing it forward. We’ve still got three issues to go, but this one feels like a much more advanced one, and I mean that in the most complimentary way possible. I think that, even without the full knowledge of what’s going on, this is still worth picking up, though you’ll definitely get more out of it if you’re also reading GREEN LANTERN CORPS. 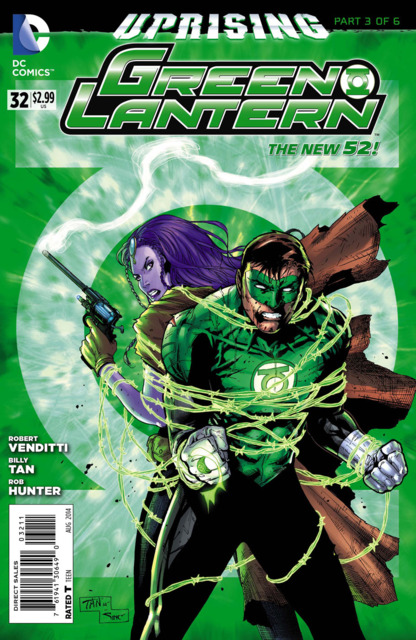