Hal and his fellow Lanterns have a decision to make regarding some outlaws.

There are big changes in Saint Walker here, which lead him to just being called "Walker." He was the leader of the Blue Lantern Corps which were a symbol of hope, and that's something Saint Walker has completely lost here, his hope.

Readers get to learn more about some of the new lanterns working with Hal in this issue. Gorin-Sunn shows Hal that not only is he a pretty awesome member of the Green Lantern Corps, but outside of wearing the ring, he's still a dynamic force. Gorin-Sunn saves everyone by showing Hal he's a being of pure energy and can interface with electronics in a really cool scene.

Simon Baz is back! Wait... only for a limited time? Simon Baz feels like the McRib of DC Characters. It is cool to see him integrated into this book, and while it truly sucks that he's only here for a few pages, he actually has a purpose, for once: to protect Hal Jordan's brother. Hopefully, this gets explored a bit more in future issues. Fans want more Simon Baz!

There may be multiple artists on this book, but it's hard to tell when the switches are, unless you read the opening pages to find out who worked on what. Billy Tan's and Martin Coccolo's art is very solid throughout the issue and their styles are extremely similar, which is great for a book with multiple artists.

The problem here is that is packs a little too much into a single issue, which creates an overall, jumpy issue. Venditti tries to cover quite a lot in this very ambitious title, since so much in the Green Lantern books has changed drastically. Between Simon Baz, Saint Walker and Mogo, Hal and his team, and the on-going idea that the Corps are viewed as the killers of the universe, the book just gives too much in a short amount of time.

The ending is a bit confusing. I feel like I missed out on something from a previous issue. I know who the character is but I'm not sure what's going on with the vials and their importance. 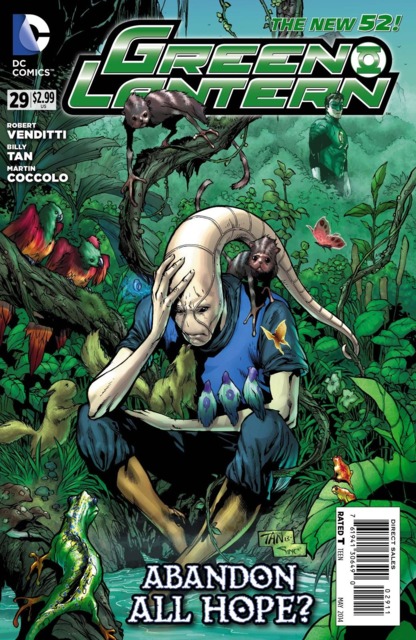