The story is fast approaching its conclusion and both Hal Jordan and Sinestro must make big decisions that will change who they are.

Last issue I had minor concerns with the art but seeing Ardian Syaf and Szymon Kudranski handle their sections of the issue was incredible. Normally different artists on the same issue is a distraction but it works perfectly here as the story takes place on Korugar and in the Dead Zone.

We know Geoff Johns' run is ending and you can feel the story's pace building more and more. Both Sinestro and Hal are in sticky situations. A great thing Johns has done is evolve both characters. Sinestro may be perceived as a one-dimensional character but Johns never ceases to amaze with what he has Sinestro do next. Hal has also come a long way since the very first issue of this volume.

As you move through the issue, there are moments you'll appreciate but it's not until the end Johns lays it all out. Next issue is his last one and it's clear he's planning on going out with a bang.

I still am not a fan of the First Lantern. I can appreciate him being an immensely powerful threat but his motives come across as petty. This is how it's been in all the tie-in issues for Wrath of the First Lantern. I may have missed it but even his speech pattern doesn't fit for such an ancient being that's been locked up for millennia. He may be the driving force for some cool things that are about to happen but I'm ready for his story to be over, even though that means Geoff Johns run is over as well.

The story takes a slight dip as we see the First Lantern do this tormenting thing as he did with Kyle and Guy. There are some interesting moments but it's not until the end it all pays off.

The end is near and it's clear Geoff Johns is going all out in delivering an explosive final issue for his run. Sinestro and Hal are two characters he's spent an enormous amount of time cultivating and you can see he still has plenty more to do with them. The story of the First Lantern may be getting a tad tiresome as it's continuing from the other titles but you'll be on the edge of your seat by the time you reach the end of this issue. There's no telling what Geoff Johns has planned next. That's what makes this series so fun and exciting. 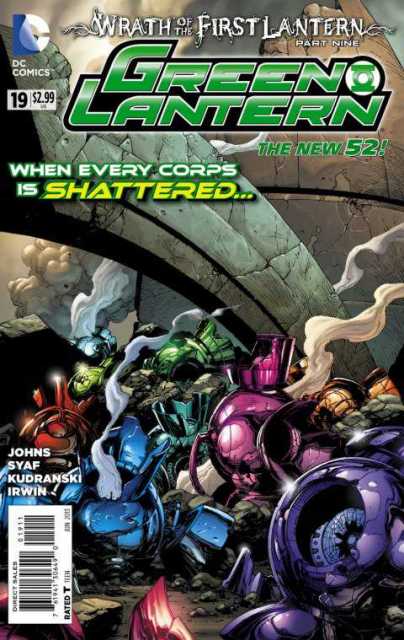