It's time for the main event: Green Arrow vs. Richard Dragon!

Well, that was an exciting and proper note for Jeff Lemire to leave on! Not only does he script an awesome action scene, but he manages to depart the book in a very praiseworthy way. You can really tell this chapter is his way of saying goodbye to the great series and you can't help but appreciate it. Aside from the ending with "Richard Dragon," he manages to tidy up a few plot points, leave others open for more potential, and pave the way for an all-new status quo. Let's just hope the upcoming team can make proper use of the mythos he's established!

The big fight was well worth the wait. As said above, the way it ends is a bit of a bummer, but man, Lemire's script really gave the art team the chance to go all out and obviously, they did a tremendous job. Not only does Lemire give Dragon the opportunity to show off his abilities as a fighter (a very cool POV shot returns), but he also uses this chapter to make me care even more about Emiko. Yes, she totally feels like a female version of Damian Wayne, but since when is having similar traits to a totally lovable character a bad thing? She had at least two lines in here that made me smirk and she's definitely a welcome addition to the cast. The dynamic between her and Oliver is loaded with possibilities. Even though the stakes are through the roof in this issue, Lemire also manages to sprinkle in a little more levity during a moment in an elevator.

As expected, artist Andrea Sorrentino and colorist Marcelo Maiolo create a final chapter that's overflowing with beautiful, creative, and memorable panels. From the execution of the big fight scene (there's an elbow attack that dropped my jaw) to the absolutely gorgeous final page (a nice contrast to the frequent shots at night and implies a bright future), my eyes were more than pleased by each and every page. Personal favorites include Richard Dragon's big "come get some" pose and the final splash-page, but there's so many good panels to choose from! It really is impressive how Sorreinto and Maiolo find a way to make each page stunning. The upcoming art team has some very big shoes to fill, that's for sure.

My only noteworthy complaint is the conclusion with Richard Dragon. It feels pretty abrupt the way it all wraps up and, compared to his previous showings, definitely seems to downplay him (unless he was fazed by that tackle, but he seems tougher than that). They were building a lot of tension between these characters and, even though there's a good bit of dialogue, it feels like there isn't proper closure with that narrative. It really is a shame this is the creative team's final issue because there's so much potential with the way this issue ends. Maybe there's a lucky alternate universe out there where Lemire, Sorrentino, and Maiolo get to continue Oliver's adventures.

Can you believe it's already time to say goodbye to GREEN ARROW's stellar creative team?! It feels like not so long ago that Lemire, Sorreinto, and Maiolo took over and put this book in a whole new and legitimately exciting direction. It's a real shame they're now going off to different projects, but at least they're leaving us with a thoroughly satisfying conclusion and a meaningful ending. It's a bit of a bummer the way the conflict with Dragon was resolved and I would have liked to see a wee bit more closure with Fyff and Singh, but this is still a great issue and an especially great way to depart the book. GREEN ARROW went from a book that wasn't on many radars to one of the best books available. They did wonders with Oliver Queen's life and produced some excellent adventures. You'll be missed, Lemire, Sorrentino, and Maiolo! Here's hoping the next team can give this conclusion a proper follow-up! 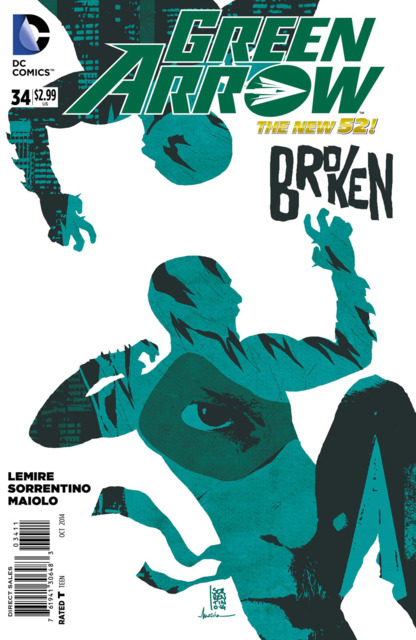