Green Arrow is finally back in Seattle and it's time to focus on Richard Dragon!

Writer Jeff Lemire's last story, The Outsiders War, was a great ride, but the teases of Richard Dragon and John Diggle he included shot my hype for this latest arc, Broken, right through the roof. Thankfully, the first chapter lived up to my expectations and then some!

First and foremost, this opening issue gives Dragon way more personality. No longer is he just a man of few words and a brutally effective hand-to-hand combat. Lemire reveals the character's origin story and it has a few huge developments (I wonder if his father's name is an intentional nod to Grand Theft Auto or just a coincidence?). It's a completely new take on the martial arts character and will definitely surprise some. Additionally, Lemire gets all of the basics out of the way with him. We now know why he hates Green Arrow and Diggle and we also now know why he's such a bad dude. Sure, it's your cliche "let me explain my story to you, hero" kind of scenario, but it's well-written and the visuals are phenomenal. For this "past" story, artist Andrea Sorrentino and colorist Marcelo Maiolo switch it up a little bit. Sorrentino places a stronger focus on silhouettes and Maiolo goes to town on these panels with some standout tones. It may not blow you away like some of the other masterpieces this art team has produced, but it still looks great and fits the mood very well.

If you read the last issue, then you know Dragon's not the only foe roaming around in Seattle. Count Vertigo, Brick, and Killer Moth all make appearances, but this issue gives Red Dart the most attention. We hear why Vertigo's involved, Brick briefly shows he's a tank, and Killer Moth makes a quick cameo, but man, Red Dart unleashes! I'm really hoping this isn't a case of a villain making a cool debut and then being turned into fodder in every other appearance. Anyway, it's a thoroughly fun dose of action and a great way to kick this story off.

My eyes are in heaven when they're looking at Sorrentino and Maiolo's artwork. Simply put: it's consistently marvelous. The character work is engaging, there's a thorough amount of attention given to the environments (love how they almost always manage to include the moon), and so much of the action is brought to life in such a thrilling way. That alone would make it beyond impressive, but then they go and make the panels and layouts creative, too. The telling of the Dragon's story keeps the visuals refreshing and the way they choose to highlight certain parts of the action and shift the focus of the colors keeps these pages exciting, even when there isn't any action going on. It's easily one of the best looking books you'll read.

I love the artwork, but there were a couple panels where the character work felt a little stiff and didn't make the moment feel as energetic as it could. One example is Oliver dodging darts (it seems like he's casually leaning) and the other involved a punch. Still spectacular visuals overall, though.

One minor gripe -- which can absolutely be explained later on -- is Richard Dragon's plan. How does he expect to take even more control when his actions are drawing national attention? He has some powerful allies, and I understand why he thinks he can defeat Green Arrow, but he can't honestly think he has enough power to take on the armed forces? After all, the opening broadcast said the President would send the National Guard in a couple of days if it isn't resolved. And wouldn't this potentially lure in other heroes if a big city is being taken over by criminals? Like I said, it's a minor gripe and I'm perfectly fine with suspension of disbelief in most cases, but it's a little tough to shrug that off when his assault is taking such a large scale.

Broken is off to a very strong start. Lemire wastes no time getting things moving and he covers a ton of ground. Multiple -- and not to mention very awesome -- plot points are established here and I'm beyond happy to see the developments in The Outsiders War aren't being left behind. Throw in Sorrentino and Maiolo's consistently incredible visuals and this is an issue every single Green Arrow fan needs to buy. Oh, and I can't forget to mention this is a jumping on point, too! 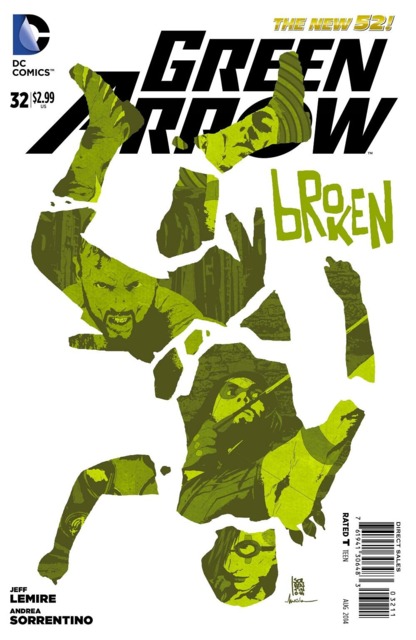