Komodo has taken control of the Outsiders and prepares to take action.

Jeff Lemire refuses to slow down the pace in The Outsiders War and yes, that's most definitely a good thing! There's major progress on all fronts (unless you're Shado or Robert, that is) and each development will leave you anxiously awaiting the next issue. The scenes in Seattle are doing a superb job building the hype for the next story arc, but it's the dynamic between Komodo and Emiko that really shines in this one. Getting the story from the villain's perspective is a nice change of pace and presents a much more humanizing approach to the speedy little archer. This also further solidifies Komodo as a rather selfish and terrible dude. Lemire's really doing a solid job turning him into Oliver's archenemy.

On top of revealing more of the plot and putting a spotlight on certain relationships, Lemire delivers a short-lived yet very thrilling fight between Green Arrow and the Spear Clan. While the version of Oliver over in Arrow can't seem to resist a hand-to-hand fight, Lemire makes sure to focus on Oliver's abilities as an archer and tactician. A fight doesn't need to be extended to be exciting and Lemire absolutely proves that in this issue with two effectively used (and very cool) trick arrows.

Artist Andrea Sorrentino and colorist Marcelo Maiolo once again create a completely gorgeous issue. The execution of the two trick arrows are creative and beautiful. You can feel the force of the sonic arrow ringing in the goons ears and the way the "umbrella" arrow rains down on enemies is wonderfully cinematic. The attention given to the environment (e.g. the moon, skyline, etc) left me gazing and eventually I realized I had to pick up my jaw. To top it all off, the panel layouts for the cathedral scenes are stunning. Overall, this is some of the most spectacular artwork you'll find in current comics.

Yes, the cliffhanger is shocking at first, but it's so drastic that you know it can't be true. If you take a moment to think about it, you'll remember something nearly identical has happened before in the book and that's probably how it'll be explained.

Minor gripe: in my digital copy (1st page, 4th panel), there's a "you're" when it should be "your." Also, the tension between Oliver and Shado/Richard felt somewhat glossed over. I would have liked to see a little more of that before they parted ways (for the time being).

Major gripe: we need to wait another month for the next issue!

Ladies and gentlemen, GREEN ARROW is awesome. Lemire keeps the pace moving with big developments and Sorrentino/Maiolo's artwork will make sure your eyes are glued to the panels. It's not only a legitimately exciting and absorbing book, but it's easily one of the best looking books DC is putting out there, too. Month after month, GREEN ARROW continues to prove it's worth every single penny of the cover price. Do yourself a favor and give this series a read. Don't worry, you can thank me later. 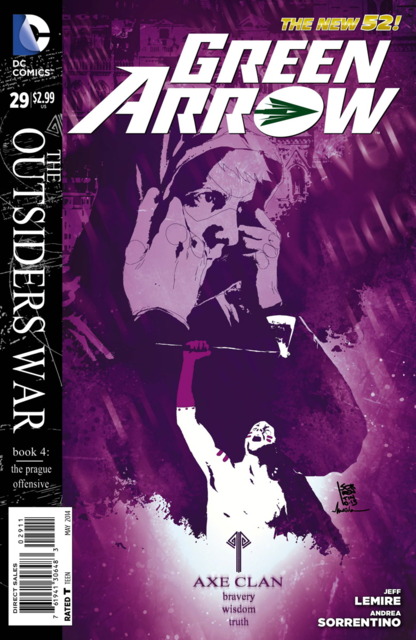