Count Vertigo heads to Vancouver before going after Green Arrow, but why is he there and what does it reveal about his past?

Okay, Andrea Sorrentino and Marcelo Maiolo need to ease up because they're starting to make other books look bad. Seriously, this is the third time in a row or so where they've presented at least one panel which grabs my attention and just refuses to let go. The entire book looks solid (as usual), throwing us into a gorgeously detailed yet grim world which is filled with more than a handful of standout pages.

The unique visual style does a superb job fitting the much more depressing and dark vibe of this issue. They're able to convey Vertigo's rage exceptionally well in a few key moments, yet they can also create a calm setting as a helicopter approaches a long abandoned facility surrounded by tall grass and mountains. It's a rare moment to appreciate a rather peaceful setting in an issue which is anything but soothing.

Jeff Lemire provides an interesting way to tell the Count's origin story and does humanize the villain to some degree. The tale goes to show that a little bit of power (okay, a lot of bit) can give anyone a much needed confidence boost and even go straight to their head. We're hit with flashbacks as Vertigo essentially makes a stop before heading to Seattle, but the rewinds in time never feel forced or abrupt. They're implemented well and help us jump into the guy's shoes as we discover why he's making this stop. Even though the story takes some familiar strides and doesn't really make him particularly compelling, it's still very well-written.

I don't have any big complaints about the issue, but this is a story which definitely draws from familiar elements and hits us with a few predictable strides. It's not necessarily a bad thing, but it prevented me from really loving the narrative.

Minor gripe: it only happens twice, but the helicopter's blades are lacking any sense of motion.

Sorrentino and Maiolo once again create a stellar looking issue with a few brilliantly cinematic moments, but that should come as no surprise by now if you've been following the title. Meanwhile, Lemire is able to present a fairly engaging and somewhat emotional story for Oliver's enemy, even if it doesn't make him stand out all that much. Additionally, it doesn't force us out of what's going on in the book or feel like a self-contained one-shot. Instead, it reads like another chapter in the story, just told from the opposite side this time around.

Lemire, Sorrentino and Maiolo are without question the best thing to happen to Oliver in The New 52 and continue to deliver. I can't wait for the next issue. Okay, I can, but seeing as the book is so good, I'd prefer not to. 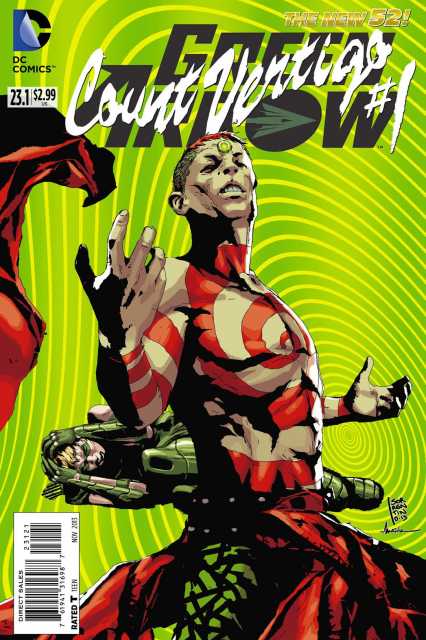