Expect the unexpected in the latest issue of this unique series.

The seventh issue of GREAT PACIFIC is a good place to start reading if you have not been following this series. It's a great jumping on point because it's been over a year since the series' protagonist, Chas Worthington, first landed on his very own island of garbage, or as he likes to call it, "New Texas." The first six issues of this series dealt with this idea that Worthington, no doubt, would encounter great difficulty after he decided to establish his very own country. It was naive of him to think that he was the only one with an eye on a piece of land that was just floating in the ocean, even if it is just land-fill. In eighteen months the population of New Texas has gone from three, essentially, to 705. Not only that, but in the eighteen months of its existence, Worthington has already constructed a water purification plant and a variety of other things that would be necessary for individuals to live on an island that technically isn't really an island.

This issue really made me wonder about Worthington's intentions, and I think that was the creative team's point. What is his motive for creating this new safe-haven, and, is it really a safe-haven? Often, projects that start off with good intentions are shifted and warped into bad things unintentionally. Chas' motives are something we saw the creative touch on very briefly in the start of this series, and in the beginning he seemed to have his heart in the right place. The thing is, power changes people sometimes, and the situation has changed dramatically in eighteen months. There is a moment where one character begs the question "is this a police state or a land of plenty?" and this theme is sort of reiterated in other parts of this comic as well, like the moment where Chas asks whether the newspaper can be recalled because he does not like his own picture. Recalling the paper would violate the anti censorship laws that he himself instilled. It seems Chas' motivations have since skewed, and that becomes really clear the moment that he says "I bought the cabinet, Alex. Hell, I paid cash for it."

This change of perspective will make things very interesting in future issues. Somehow, I fear Worthington will experience a very rude awakening when he discovers that things won't come that easy for him.

By the time we reach the final page of this issue we see that the story is definitely moving in a different direction.

There is a huge difference between the time that Worthington first came upon the island and a year and a half later, and it feels like a lot has happened that we just don't get to see. I hope that the creative team does decide to take a look back at how Worthington was able to get from population 3 to population 705 in 18 months in future issues of this series because I really think that would make for an interesting story; that's one of the reasons I personally, as a reviewer, felt so lured by this series. It was very different from anything I had seen in the current comics market.

Although this issue starts off a bit slow, the pace of it definitely picks up and things get very interesting by the time you reach the final page of the issue.

This series was, initially, about Chas Worthington, but is it still? Once you reach the final page of this issue you will likely get the sense that things are very different now. One of the things I like about this comic is that it alludes to this idea that although some things may start out with good intentions, they don't always end up that way. This issue is definitely proof of that. One cool thing about this issue is that reading it, you think it is moving in one very specific direction, and the next thing you know it veers completely off track in an opposite way, and that's one thing that makes this an exciting read.

Although the issue starts off a bit slow, and disregards how "New Texas" has gone from population 3 to over 700, we still get a very interesting story and one that is bound to get only more exciting in the future.

The great thing about this comic is its level of unpredictability. You may start off with some understanding of what's going on, but by the final page of this issue you will have a very different view of the story. 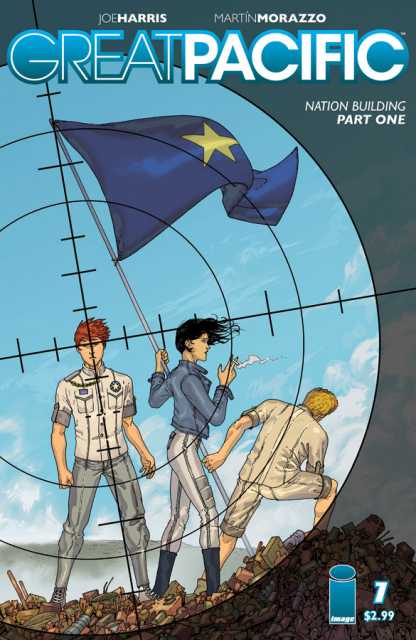