Dick Grayson has left his former life and identity behind to join a secret spy organization. This is what happens next.

Sometimes change can be a good thing. There’s nothing wrong with trying to step outside the status quo. That’s something DC has often done over the years. With a beloved character like Dick Grayson, there is more of a risk over fans being outraged. To be fair, Dick is a character that used to be Batman’s kid sidekick, Robin. He later gave that up to lead the Teen Titans (in previous continuity) and, soon after, became Nightwing. He’s moved around and called different places home. If any established character in the DC Universe could make such a drastic change, it’s Dick Grayson.

Through the events in FOREVER EVIL, Nightwing’s secret identity was exposed. While it’s possible Dick Grayson could have still continued his crime fighting career (the fact that a crazed superhuman actually moved the moon out of orbit might be a distraction), but the decision was to “kill” off the identity of Dick Grayson. This was Batman’s identity so that Dick could infiltrate a secret spy organization called Spyral. We jump right into the action here, seeing Dick, as Agent 37, on an early mission (Dick was seen joining Spyral in the final issue of NIGHTWING).

Dick Grayson as a spy makes some sense. He doesn’t have superpowers to make him stand out (or give him an unfair comic book advantage) but he does have other incredible skills. Through his time with Batman, the World’s Greatest Detective, and out on his own, he would have no problem infiltrating this group and making an adjustment like this. There is plenty of potential in this series and it could be really cool to see how Dick moves forward and how it will continue to evolve his character. I did like that there’s an explanation as to how he can run around without a mask after being publicly exposed and trying to convince his loved ones he’s dead. Tim Seeley hits all the marks in this area.

Mikel Janin’s art is always a treat to see. With Dick not having a flashy costume, there needs to be care in making sure the details of his face and movement are captured. The setting isn’t a typical one you’d see in superhero comics and Janin doesn’t miss a beat. Jeromy Cox's colors adds even more glory to Janin's art and gives it a nice separate feel from the rest of the DCU.

Dick as a spy and not a superhero will take some getting used to. It’s still hard to see why the need was for this change. This may have been an idea formed before this series went underway but there isn’t exactly a whole lot here that really sells the readers on why this is a necessary change for Dick Grayson. But it does open some new areas to explore.

There is some fun in being thrown straight into the action. Unfortunately it leaves readers wondering what exactly is going on. A sense of mystery may be important in building up the suspense of the story but for us to not know exactly what the mission is or what the stakes are, it takes a little away from the enjoyment. The sudden appearance of Midnighter felt like it came out of nowhere. Hopefully we’ll see the appearance of Kathy Kane since that would make a lot of sense and could make things really interesting.

Helena Bertinelli’s inclusion (and change) still needs to be explored. Obviously this is only the first issue but there is no sign of why it was necessary to include her in this role or to completely rewrite her character history. They're could definitely be promise to this character but it's perplexing that DC felt the need to completely revamp the character. (Note: This aspect does not directly affect the rating for this issue).

Dick Grayson has evolved once again into a different guise in the DC Universe. No longer a superhero, he has now entered the world of espionage as he tries to infiltrate a spy organization. The big question is whether or not this change is necessary. Tim Seeley and Tom King set things up to arouse our curiosity and shows that this could be an exciting time for the character. Mikel Janin's art and Jeromy Cox's colors make this look really good. Dick Grayson as a spy might be a crazy idea but it could just be crazy enough to work. Dick Grayson fans will want to see where the character is going. 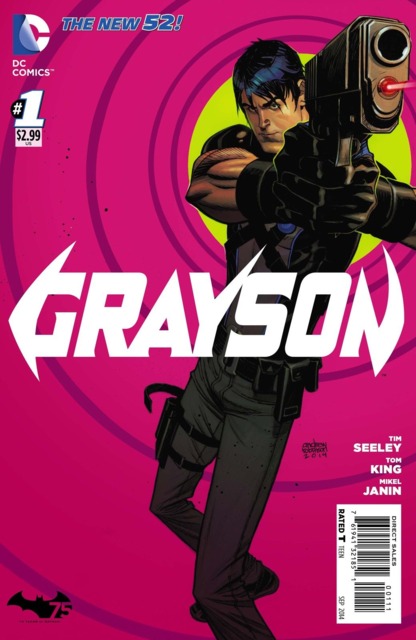