The Spectre VS the soul of the original Gotham. Both scream for vengeance, but whose scream will echo loudest?

Last issue left off with Jim Corrigan finally losing control as the Spectre came out to see just what all the fuss is, and to inflict God’s wrath upon the spirit that’s been tormenting the people of Gotham for years, even centuries. There’s just one SLIGHT problem: that spirit is a DIFFERENT spirit of vengeance, avenging the spirits of the native people who lived on the land before the colonists overran them. The question became: who was the Spectre (and whoever gives the Spectre orders) more interested in avenging? Things in this issue take a turn for the darker as the Midnight Shift struggle to somehow stop Spectre, or at least bring back Corrigan to contain him. There’s an interesting talent tin writing a horror book as intensely as this one. Horror thrives on tension, but intensity is another beast entirely and can undermine the more subtle, horrific aspects of a story if not used judiciously, but Ray Fawkes manages that particular trick with glorious aplomb and incredible skill. Even as two titanic spirits clash, Batman rides in on his plane, and cops scream at each other over what kind of sacrifice needs to be made, there’s still an undercurrent of absolute terror permeating the whole book. The dialog is fantastic and lacks any unnecessary exposition, and there’s STILL plenty of tension to go around.

A titanic part of what makes this book’s horror, and terror, still work has got to be the art by Ben Templesmith. Templesmith’s use of both wild, exaggerated character designs and judicious negative space gives the book a tone that matches, not JUST what’s going on on-panel obviously, but what’s going on just under the surface. This also helps keep the book intimate and personal, despite the obviously huge stakes, as the battle of vengeance is underscored by the battle to decide who, if anyone, need be sacrificed. And by issue’s end,at least one of those questions is answered.

There’s not much to dislike in this issue, but the overall story reads very much like Poltergeist in macro. A city built atop a Native American burial site (or, in this case, the site of genocide) and their spirits return for vengeance. It’s a very, very well-worn trope.

Well-worn or not, this is at least an interesting version of the above trope and one that holds the current occupants of the place a little more accountable than the original. It also does a fantastic job of tying back to the previous storylines of this arc, making the whole thing come together rather than just seem like a series of barely-connected introductions to these characters. The writing and art compliment each other amazingly, allowing both to do things that they otherwise couldn’t in either this genre or even any other medium. It’s always a treat to see a comic book that really takes advantage of the medium to tell its story, and this is an issue that absolutely would not have worked THIS effectively anywhere else. 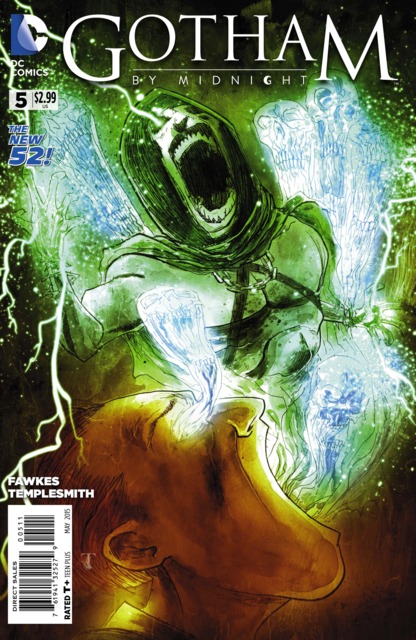