Things heat up (literally) as Olive confronts Batman over ruining her life.

This issue jumps right into the action, continuing from last issue. Killer Croc has been hiding in the tunnels beneath Gotham Academy. Olive, Maps, and their friends have discovered him and had a nice conversation with him. When Batman comes crashing in, the chaos and mayhem begins.

Little by little, Becky Cloonan and Brenden Fletcher have been giving us hints over what Olive's backstory is along with the fact she's not Batman's biggest fan. As she becomes transfixed by the fight and her feelings towards Batman, we discover she may be more like her mother than she, or any of us, realized.

While this issue does have a bit of action, the charm is really about the characters. The more you see of them, the more attached to them you become. We're seeing a bond form between them grow. In the epilogue portion, we're seeing an interesting new set up that one would assume could only be temporary but for however long it lasts, it could be really cool.

Karl Kerschl's art and the color by Msassyk and Serge LaPointe gives the series a great, almost animated feel. (If only we could get an animated series as well!)

In the main portions of the story, as great as it all looks, there is a portion, the next day in class, where you can see a difference in the color. It feels a little flat compared to the other portion with less color in the characters' cheekbones, etc that is noticeable. We do have some pages with art and color by Mingjue Helen Chen. It works for the flashback portions but gives a slightly odd feel for the final three pages.

Not affecting the rating but it's odd the solicit mentions Taco Tuesday but the food eating portion features Friday's pizza bar in the cafeteria.

GOTHAM ACADEMY has reached the conclusion of the first arc and it's been a great ride. We've learned some of the secrets of the school and Olive Silverlock. This series is like a beacon shining in the Bat-Universe titles, giving us a great different set of characters and stories while still retaining a bit of a connection to Batman. GOTHAM ACADEMY remains at the top of my list of books I truly enjoy each month. It's going to be a long wait until June for the next issue. 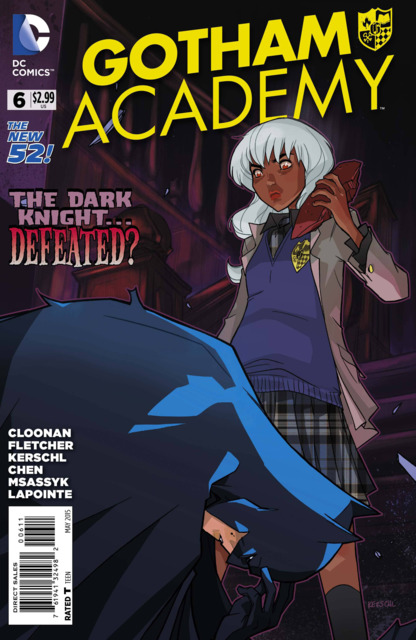