Goners #5 - We All Fall Down Part Five

Prepare for a whole lot of madness at the Bellweather Sanatorium.

Right with the awesome cover, you can tell this is a comic that's going to be a good time for your eyes. Jorge Corona, Steve Wands, and Gabriel Cassata's visuals continue to do a brilliant job creating characters and an atmosphere that oozes the perfect blend of adventure, humor, and horror. I especially love how there's just slight changes when we jump to a drastically different point in time or place. Whether it's aiming to frighten you, make you smile or drop your jaw, this visual team nails it on each and every single page. Sure, the attention to detail fluctuates at times (there's some very crowded moments), but the good vastly outweighs the bad and everything from the character work to the environments to the colors delivers. I just wish we had a chance to see more of the big clash! I'm sure they could have plenty of fun fleshing that out. Maybe we'll see more of it in the next issue.

Jacob Semahn's story refuses to slowdown. Now that many of the characters have been given a satisfactory introduction, more and more of this fantastical world is spilling into these pages. Not only does the story with Josiah and Zoe make some very interesting progress, but there's also a very interesting reveal about this world's history. At times it feels like this series has too much on its plate, but the teasers and developments continue to keep my attention and I love how the series incorporates so many different tones. We could go from a guy having a blast as he fights monsters to something terribly tragic and neither moment takes away from the other one.

I'm glad GONERS doesn't take a slow burn approach with its storytelling, but part of me feels like it's piling on the worldbuilding a little too much. It's great they're expanding this surreal world, but I feel like there hasn't been much time to let certain developments sink in before we're hit with yet another reveal. Also, considering just how surreal this world is and all that it has to offer, I can't help but not feel as shocked as I should be by the cliffhanger. I'm thinking the restricted view is intentional or there's a plot device that'll be revealed. Maybe the next chapter will make me eat my words, but given all that we've witnessed, I'm left feeling curious instead of devastated.

GONERS' amazing visuals grabs my attention and then its evergrowing story keeps me around. Every panel has something that's worth looking at for more than a few seconds and there's some ginormous mythos building going on in this story. It may feel like they're hitting you with a little too much, but it's still incredibly interesting and creative stuff. I'm still left asking plenty of questions about certain elements, but that's part of the fun, after all. Part of me wishes this chapter focused a little more on the fun and charming moments before getting into the heavier material, but it's still more than enough keep me thinking about everything that's going on. And man, there's a lot going on. If this fun and twisted take on fantasy adventure stories sounds appealing to you, I strongly recommend beginning with the first issue. 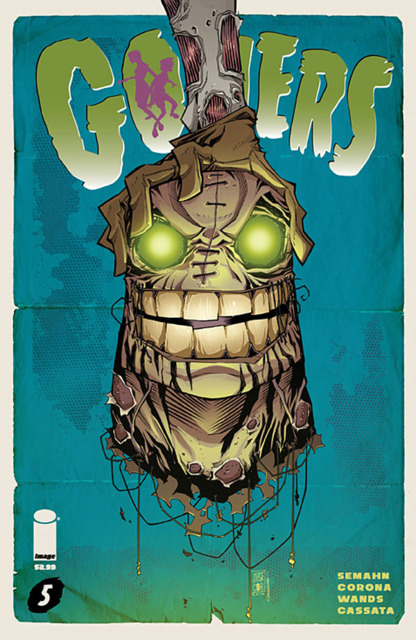