The first arc comes to a close here, and this issue has more twists and turns than the Stelvio Pass in Italy! (That's a really twisty road)

The group finds a way to trap a ghost in order to complete their mission for Markus. Lots of big reveals and game changing information in jaw dropping issue of GHOSTED. This issue is full of things that would spoil the whole entire story. We're going to try and get through this without giving anything away.

The turn in this issue was really cool. It's a back and forth battle between Jackson and Anderson, and the way it was resolved threw my through a loop. It was really unexpected. If I could describe this entire book in one word, it would be "unexpected." I really felt like I was on the edge of my seat here because it truly seemed like anything could happen.

This arc really wraps up nicely. The ending feels a tad abrupt, but in a good way. The way the story moves keeps the reader on their toes. The end of this story really comes out of nowhere, but it truly works well. And all-in-all, if it were dragged out another issue, it would feel, well, dragged out. Sometimes, as comic readers, we expect a 6 issue story, and for everything to be wrapped up into a tight little ball, this shakes things up a bit.

This issue leads into bigger things as well. This isn't a "one and done" story. The last few pages of this issue really open the doors to the world of GHOSTED and makes it possible for this to continue into a really worthwhile on-going series. After the last scene in this issue, I'm extremely excited to see where this goes next.

A few small nitpicks here. The captioning, in the opening sequence, is pretty dang hard to read. They have black backgrounds and white lettering, on top of some pretty dark backgrounds. They blend into each other and it can be easy to miss them.

There was one particular shot, in the last issue, where a character's face was half in the shadows but the eyes popped out like there was direct light on them. This happens numerous times in the first half of this book. It just looks very odd.

There's a few pages where the art just feels a bit rushed. It doesn't have the same quality or consistency as the other panels and pages within the book. It's a bit more noticeable on the non-ghost panels, and this is quite a bummer since artist Goran Sudzuka has done a phenomenal job thus far, even with a good 85% of this issue.

It's tough to really get in depth with this issue because there's so much revealed and so much really changes here, but this was a very satisfying and solid end to this story line and the opening to something awesome. It feels like this book can really hold its own as an on-going series because while everything is pretty wrapped up, there's a couple loose ends writer Josh Williamson could go back to. I believe the trade for this book comes out soon, so make sure to check that out if you can't find the single issues. Aside from that, I highly recommend this issue. 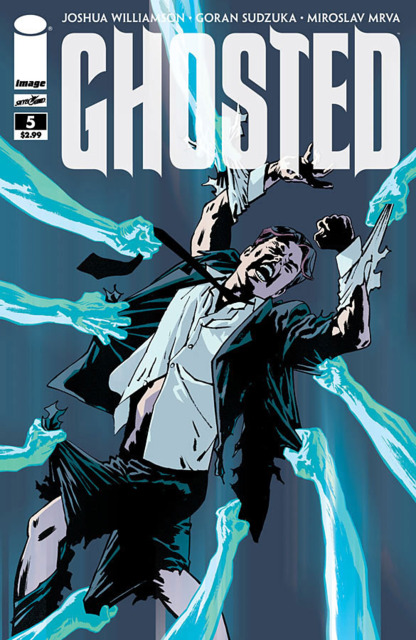