Anderson's history is explored and how she met Markus.

Anderson, the ghost that haunts Jackson, has been a fan favorite character since the start of this series. She's tough, cool, and doesn't take guff from anyone. However, there's little info about her past, since she wasn't part of Jackson's original crew and was Markus Schrecken's bodyguard. Issue #11 of GHOSTED explores her past and how she met Markus in outstanding fashion.

Is this a story that needs to be told? Nope, but it is one fans of the book will appreciate after reading. The whole issue is really a story about Anderson's introduction into the world of the occult. Anderson's rise from hitman to Markus' bodyguard is one hell of a ride and fans of the series will really enjoy seeing where this character came from and the jump into the present gives readers an idea of where she's going... No where.

Speaking of the jump to the present, the ending to this issue is awesome. One thing I mentioned in a previous issue is that (spoilers for this issue in this bit) Jackson has to be connected to mysticism, the occult, or something else. He keeps finding himself involved in these otherwordly stories and it's just too convenient. The final page of this issue confirms that theory, and this just excites me for future issues of this series. Writer Joshua Williamson leaves bread crumbs for the reader as this series goes on, which really keep them attached to the story, its characters, and the overall world. That's what keeps them coming back.

Goran Sudzuka, who spent the past arc working on WONDER WOMAN, returns to GHOSTED! With him, is Miroslav Mrva on colors. It's great to see Sudzuka back on this series, which really defined the look and feel of the book in the first arc. His work, with Mrva's colors, isn't as clean as Gianfulice's style, but that's the most appealing part of Sudzuka. Not to take anything away from Gianfulice, who did a stunning job on the last arc, but Sudzuka's style fits well into the world of ghosts, mystics, and the occult. That final page is haunting and fans will love seeing Sudzuka return.

Readers who haven't been reading this book will be pretty lost and not get the point of the issue. However, you shouldn't be starting a series at issue #11. Pick up the first two trades.

GHOSTED comes back after a break swinging hard. It explores Anderson's past and while it isn't a story that needs to be told, it's a story fans will be more than happy to read. However, this is a terrible jumping on point for new readers. Do yourselves a favor and buy the trades before reading this. Williamson, Sudzuka, and Mrva provide an exciting, one-shot read, that readers will want to read again and again. Overall, this is a fun horror series that you need on your pull list. 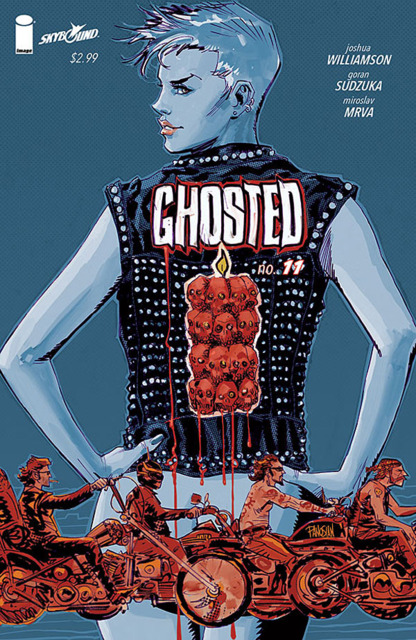