Jackson Winters is released from prison early because someone wants him to steal a ghost.

Prisoner Jackson T Winters is released from prison early so he can help Markus Schrecken add something to his ever-growing collection: a ghost. Jackson assembles a team to go into the old Trask Mansion in hopes of finding the spirit of one of the hundreds of people killed there.

I knew pretty much nothing going into this book. I didn't read the solicits, and I had no clue what to expect, and I'm really glad I did that. The book had a fantastic start, as we see Jackson living day-to-day as an inmate in a prison. As soon as we get comfortable with our surroundings, Jackson is being broken out and now at Markus' house. Writer Joshua Williamson keeps this book moving and keeps the reader on their toes.

The concept, at first, seemed a bit silly to me, but by the end of the issue, I really loved the idea of a man leading a team trying to catch a ghost in a mansion where hundreds of people have died. The back story behind the family was very cool, and I hope it's something that gets explored as the book continues. I hope there's this cool aura of mystery weaved within the book. Also, the book has a very cool Ocean's Eleven feel to it. It's an ensemble cast that all has their skill set, which will no doubt come in handy later.

Goran Sudzuka, who also worked on my favorite series of all time (ALL TIME) Y: THE LAST MAN, provides some really great art here. It feels like home to me. It's realism mixed with an animated series style. Goran conveys emotion extremely well through facial expressions, and his art is simple, yet complex through body language and pacing.

I really don't like the cover to this book. I feel like the art and colors do not do the rest of the book justice.

I'm having a hard time understanding why Jackson is the man for the job, in Markus' eyes. Sure, Jackson was one a thief who seemed pretty successful, but how does that translate to stealing ghosts? Markus doesn't seem insane enough to believe he is the man for the job, just eccentric. I can suspend my disbelief for most of the stuff in this book, and in comics in general, but I can't do it for this. There has to be a better reason why Jackson was chosen.

GHOSTED #1 is a promising start to a different, but very cool new series. I really like the Ocean's Eleven meets every dumb ghost hunting show (minus the laughs) feel to this book. It's fun and extremely fresh. Image (Skybound) has been great at putting together great new series that are well worth your time and money, and while this book isn't perfect, it's an amazing start. I don't think the cover does the book justice and I had a problem with why Jackson was chosen for this job. Aside from that, the art and the writing are awesome, and you really should pick this one up.

Overall, I highly recommend this issue. 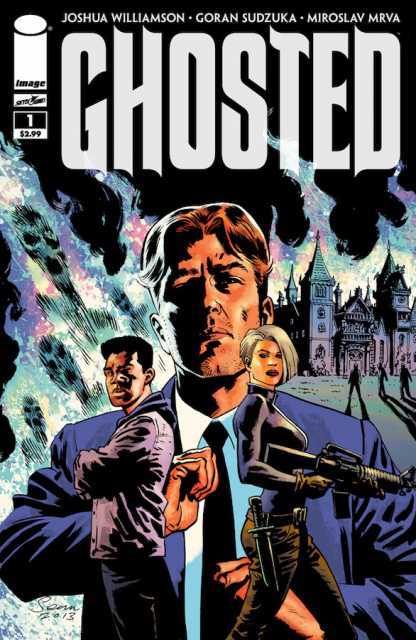