Tiamat continues to baffle the team!

Writer Erik Burnham covers a lot of ground in this issue. The return of Vigo means a whole lot of action, Winston Zeddemore's relationship receives a bit of the spotlight, Ray's dilemma returns, the possession of Louis and Dana are addressed, and -- as if that wasn't enough -- there's even a more compassionate moment with Peter Venkman. Yeah, there's a lot going on in this issue. While it does feel like we rush a little too quickly from one plot to the next (see "The Bad" for more, obviously), Burnham's still able to make it an engaging look into these numerous storylines. The laughs aren't quite as strong as previous issues and the action kind of comes and goes without having too much of an impact, but, as a major fan of the series, it was still a fairly enjoyable experience watching everything play out and leaves me wondering which, if any, developments will stick. It definitely seems like these issues are being tackled as we take a bit of a break before Tiamat makes a very elaborate return, though.

The very first page tells you almost everything you need to know about why I'm such a big supporter of artist Dan Schoening and colorist Luis Antonio Delgado's work with this series. The vibrant colors are so visually pleasing and the way the lighting impacts the characters just feels right. And, speaking of the characters, Schoening's style brings them to life in such an animated and wonderfully lighthearted manner. It's a perfect fit for the mood Burnham establishes and it almost feels like this work can serve as the designs for a new animated series. Whether it's characters blasting away or a pissed off looking Vigo, these two are able to do a satisfying job putting it all on the page. The only attribute not on that opening page is the extensive work that they put into the environments. Even something as simple as a scene in a restaurant is presented with all of these scattered details that'll catch your eye. From paintings on the wall to an assortment of bottles, I can't help but appreciate how much work goes into making us feel immersed in these locations.

In this issue, Winston Zeddemore says "it never feels good to sit around and wait for things to get serious." That somewhat describes my thoughts on this issue. Yes, there's some action and it's gorgeously illustrated and colored, but these scenes end rather abruptly and things are seemingly resolved at a pretty quick rate. It's almost like we're going through the motions that will lead us to the next big reappearance of Tiamat. It's not that the issue was boring or anything along those lines, but it didn't feel quite as exciting as it could have been and it almost seems like things are getting wrapped up and teased just to move on to the next big dilemma.

The jump to the interlude -- while obviously important down the road -- felt like a somewhat jarring and random transition. It's great knowing Winston's relationship will earn more focus in due time, but the conversation seems like it could have been condensed and saved for when that issue is brought to the forefront. In turn, that extra space could have been used to flesh out the current situations a bit more. I mean, when we're dealing with the apparent return of Vigo and "exorcisms," you can't blame me for wanting to see more of that instead of Tiyah attempting to justify her husband's profession.

Minor gripe: as much as I adore Schoening's pencils, hands occasionally offer a noticeable contrast to the rest of the character's body. Yes, hands tend to be wrinkly and bony, but these attributes feel a little excessive at some points, especially when so located so closely to the character's incredibly sooth face.

GHOSTBUSTERS #18 is a bit of a mixed experience for me. It seems like so many potentially big and fun plot elements are swiftly resolved and, unless these have some major developments down the road, it almost feels like a filler issue as we await Tiamat's grand return. But, on the flip side, Burnham's script is still strong -- the characters have organic voices and it sounds like something their respective actors could deliver -- and, as always, the artwork impresses me on each and every page. Seeing as I'm left feeling so down the middle about this issue and it comes off as less compelling than previous entries, a 3 out of 5 feels appropriate. It's by no means a bad issue, but it does feel like a little bit of a departure from the book's usual delivery of exciting and hilarious developments. Despite that, I'm still left anxiously awaiting the next chapter! 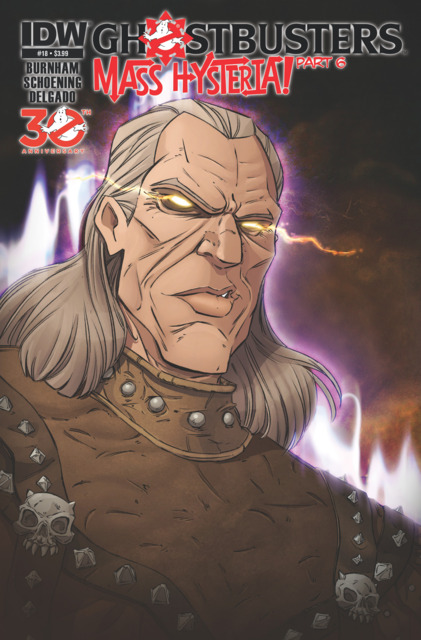