Check out the newest SECRET WARS tie-in with this spoiler-free and early review.

Felipe Smith and Juan Gedeon present one of the weirdest and wildest things to come out of SECRET WARS yet: GHOST RACERS. It's pretty obvious that a lot of what's going on here is inspired by both films Death Race 2000 and the Death Race remake. The title of GHOST RACERS pretty much says it all. A whole bunch of people who have been Ghost Rider race each other. It's pretty cut and dry from page one.

So far, we've seen how these Secret Wars books tie-in to the main idea of the book. GHOST RACERS exists on its own plane and doesn't care what else is going on. Sure, there's elements of the rest of Battleworld here. Doom is still the God King, but the issue really focuses on building up the race, the racers, and the person in charge of it all, who I am super excited about being in this book: Arcade, and you can check him out in the preview for this week's book here.

Beware of the puns ahead, but GHOST RACERS steps on the gas right from the first page and never takes the time to step on the brakes. Ok, I'm done. I promise. The book is pretty fast-paced and nuts. The action sequences are exciting and there's actually a little bit of humor here as well. Felipe Smith does a really solid job writing this book and providing a lot of bang for your buck.

I'm really digging on what Juan Gedeon and Tamra Bonvillain are doing with art here. It gets pretty chaotic and the art has this cool cinematic feel to it. Plus, we get to see redesigns of all our favorite Ghost Riders and most of them work pretty well.

This book does revolve a lot around Robbie Reyes, so if you missed out on the last volume of ALL-NEW GHOST RIDER, it may not be as friendly to you as a reader. However, at the same time, you don't need to know too much about the character other than "he's the Ghost Rider with the wicked car." I'm not really feeling the redesign of Carter Slade. His face and body look great, but his lower torso just isn't working for me. There are also some times with inconsistent artwork. There's a few times where the art gets a bit too chaotic and it doesn't read as well as it should on the page

GHOST RACERS is just a lot of fun. There's nothing huge happening here but you will feel for these characters racing against each other. The book stands on its own because it's just dealing with the area and the people within it, so it's a nice break from a lot of the other books, who are a bit more tethered to what's happening in the main book. Simply put, this is a Ghost Rider book unlike anything else. GHOST RACERS has more of a "What If" feel to it more than anything else we've seen so far. It's out there but it's a ton of fun. If you got extra cash and want something with a lot of action, check this issue out. 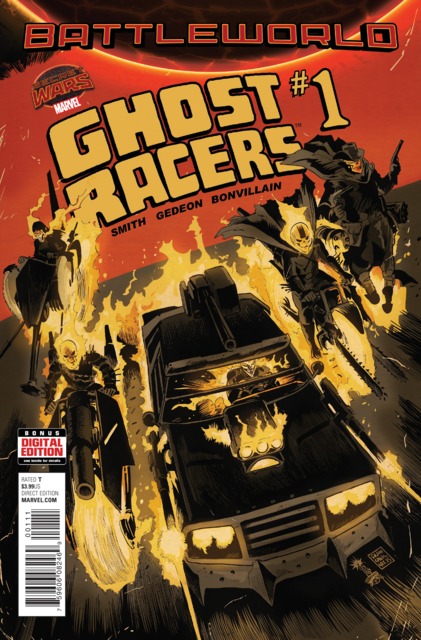