FRESH ROMANCE's first issue offers up three continuing stories of love and romance: "School Spirit," "ruined," and "The Ruby Equation." Let's just dive right in with the story that stood out the most.

"The Ruby Equation" is about Ruby, who matches people up while working at a coffee shop using a flying catlike creature. This is her mission and she only needs one more match in order to be taken back to her homeworld, as the reader is told through a conversation with her friend Clarabella. This story was written by Sarah Kuhn, art from Sally Jane Thompson, colors by Savanna Ganucheau, and letters from Steve Wands. This story leaned a bit more towards the fun and whimsical side of things rather than romance, but regardless, it was a ton of fun. Kuhn, Thompson, and Ganucheau provide a quick and fun story here that is really delightful and puts a new spin on the idea of cupid. Thompson and Ganucheau's art style is a great match, tonally, for the writing and puts a lot of fun into this story.

"Ruined" is the story about a woman, Catherine, who is to be married off to another man, although she has an admirer, her servant. The story, written by Sarah Vaughn, with art from Sarah Winifred Searle, and letters from Ryan Ferrier, is a period piece hearkening back to another time. It's a bummer of a story as Catherine is escorted to her wedding, and while she doesn't say much, Searle's art really puts the reader inside Catherine's head through her facial expressions and body language, as Catherine isn't allowed to do much outside of what everyone tells her.

"School Spirit," written by Kate Leth, with art by Arielle Jovellanos, colors by Amanda Scurti, color assists by Ensley Chau and Clare DeZutti, and letters by Taylor Esposito, takes the reader back to the fun and awkward times of romance during high school. The book is a lot more about the social aspects of relationships and love more than anything else. The art in this story is pretty awesome. Jovellanos, Scurti, Chau, and DeZutti put together some really great, stylized art, and the color-work really fills the page and breathes a lot of life into it

"School Spirit" was a good story but in no way had that grab that the other two stories had. "Ruined" had this wonderful emotional aspect to it, and "The Ruby Equation" had this wonderful element of fantasy and fun to it, but the first story of FRESH ROMANCE was down the middle of the road. It wasn't bad by any means, but when comparing it to the other two stories, it fell a tad flat.

Romance is alive with FRESH ROMANCE. While I was pretty excited about this new book when the Kickstarter launched, the actual book lives up to the hype and will be a delight for those interested in this genre of comic storytelling. The first issue contains a plethora of incredibly talented creative folks from the industry and while the first story didn't grab me as much as the rest of the book, overall, this first issue is a smashing success.

If you're looking to check out FRESH ROMANCE, head to the RosyPress website or on Comixology 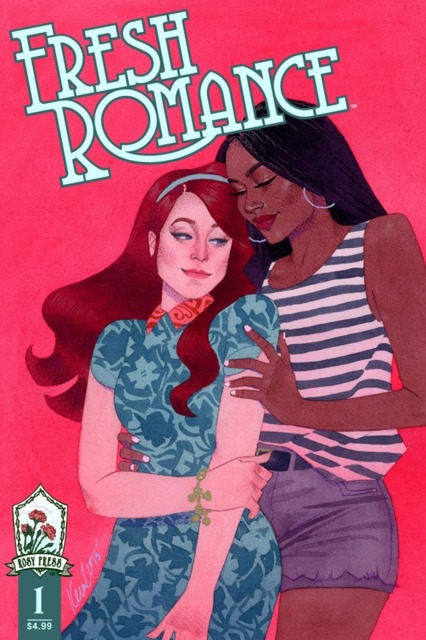