Get a closer look at the upcoming Marvel event

So what is SECRET WARS #0? Well, it's a place for new readers to jump on to get into this gigantic Marvel event. It's a literal catch-up game for those out of the look. In addition, there's also a Avengers/Attack on Titan story in the back of this book that is presented in English for the first time.

We're going to split this up into two sections.

Do you want new people to jump on a book? Then give away something free like this. The majority of this story is Valeria Richards telling the rest of the Future Foundation about the Incursions and how the world is going to end. It's a lot more "showing" than "telling," but in this case, it really works because there's simply too much to show, building up to this story. This is probably the easiest way to catch up new readers with the limited amount of space for this FCBD book.

It's such a straight to the point issue and written incredibly well by Jonathan Hickman. There's a lot of unfamiliar elements to newer readers (since the Future Foundation doesn't have their own cartoon... and they should) but Hickman makes this issue highly accessible, which is wonderful since Hickman can be a bit too high-concept at times for some readers.

Paul Renaud does some great art in the issue. It's clear and crisp and there's a sense of fun to it, which is hopefully the tone SECRET WARS will carry with it. The final two-page spread is gorgeous and your eye will bounce around the page quite a bit.

This was a bit of a confusing story for me. I will say the art team of Gerardo Sandoval, colorist Dono Sanchez Almara, with breakdowns from C.B. Cebulski, was very impressive. There's a lot of cool takes on perspective here, with how these images are presented. On top of everything else, the color work is beautiful.

Like above, here's the book split into its two parts.

As cool as the final page was, the idea that "we have to fight these other characters.... because" routine just doesn't work. At least with CONVERGENCE, there's a reason to battle and actual stakes. I hate to sit here and compare the two, but when both companies are offering us a few months of "What if?" stories, there's no way around it. Here, the members of the 616 and 1610 are going to fight because they think that's what they have to do and it just doesn't work. Luckily, it's only one page and it's just people rushing into battle.

I do not read manga and know nothing about ATTACK ON TITAN. I am lost. To me, this is just a bunch of pages of people punching each other.

If you're a Marvel fan, this book is a must have, for the SECRET WARS part. Sure, the ending doesn't feel like it works as smoothly as everything else, but this is a great catch-up to the upcoming event and it's great to see it all through the eyes of the Future Foundation. The Attack on Titan back-up looked cool and if you're a fan of the manga, you'll probably love it, but it was just ok overall. 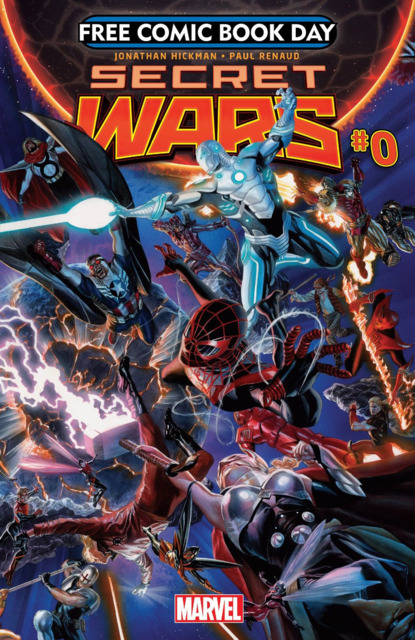