We get a glimpse at the All-New, All-Different Avengers and Uncanny Avengers to find out what's coming up.

Starting with the Avengers portion of the issue, we have a pretty interesting team. Falcon (as Captain America) and Vision are the veterans. We also have Iron Man (?). Of course there is a question as to who this Iron Man is since it's not his current "Superior" suit and he's not acting like a big jerk. The new Thor is part of the team as well. We've been seeing her as part of the Avengers in some different things even though we haven't actually seen her meet them or reveal who she is. Then there's the younger members. Sam Alexander has a bit of experience under his belt now. He's been all over space and has become a member of the team during Axis. Kamala Khan is still a little new as Ms. Marvel but she definitely has a lot of spirit and enthusiasm. Miles Morales has seen his share of action as well but how familiar is he with this universe?

With an attack in downtown Manhattan, the team has to split up to fight a big threat and to stop whoever is behind it all. In an interesting decision, the younger members are sent off on their own as the older Avengers deal with the bigger threat. Is this the best decision? There is something for everyone on the team to learn here.

Mark Waid does a good job balancing the different characters. This is a very different Avengers roster compared to what we're used to. That's a good thing since it does give the story a completely different feel. With the younger members and the colors by Frank Martin, there is a more brighter and positive vibe going on. The threat they face is dangerous so the story isn't going to be all fun and games. Mahmud Asrar has shown us before how he can take on drawing a team book and one filled with younger characters. He excels at the facial expressions and gives the story a light-hearted feel even though there's some serious business going down.

In the UNCANNY INHUMANS portion, we see the Terrigen Cloud is still going around the world. In Mumbai, India, some people are exposed and a couple individuals are transformed. There is a quick transformation here, perhaps due to the confines of the story (in other words, no long periods of being in a cocoon). Charles Soule shows us how different people might react to suddenly going through a massive change.

Brandon Peterson's art and Justin Ponsor's colors look great. It's always interesting to see new character designs for the different powers and the city does feel different compared to stories set in New York City. When Medusa and her team arrives, it's a pretty grand entrance.

Johnny Storm, the Human Torch, is also here. Let's just say you'll want to see why he's hanging out with the Inhumans. It's most likely not the reason you're thinking.

These stories are meant as a bit of a tease. With the Avengers story, we have no idea how or why this team formed. It's always weird when we see the new Thor interact with others since there's still so much unknown about her in her current title. We'll have to wait to see how that plays out along with when and how Kamala joined the team. Then there's Miles Morales. We've known he was going to be part of the team but there's no explanation as to how or why he's now part of the same universe as the others. Yes, this will be answered in the upcoming SECRET WARS. You just have to dive in and enjoy the story. We'll find out those answers, along with what might be up with Iron Man, later.

The Inhumans story was good in introducing us to some new characters as well as dropping a bit of a bombshell on us. Other than that, it's just the characters following the Terrigen Cloud looking for NuHumans.

This is a pretty great FREE COMIC BOOK DAY issue. There's a lot to see. All our questions may not be answered but as a sneak peek to what's coming up, you'll definitely want to find out more about what's going to happen with the Avengers and Inhumans. It's a quality issue for a "free" comic. We get new (and important) content from Mark Waid, Charles Soule, Mahmud Asrar, and Brandon Peterson. If you have any interest in either of these teams and what's in store for them after SECRET WARS, you won't want to miss this. Make sure you visit your local comic shop to grab an issue. And be sure to thank them as well. 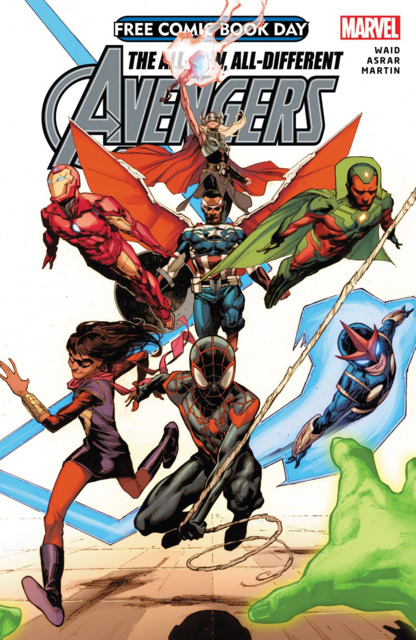