The Rogues square off against villains working for the Crime Syndicate in this thrilling finale!

By far, this was the highlight, for me, to come out of FOREVER EVIL. Writer Brian Buccellato's grasp of these characters is phenomenal. There's a lot of love and depth to them and at no point will the reader feel like these guys (and gal) blend together. They're all stand-out characters who each add their own element to the mini-series.

The opening pages really focus on a character readers haven't seen much of, Pied Piper, who did appear in the last issue as well. The opening pages gives fans a bit of insight into who he is and a few of the things he had to overcome during his time as a villain, even though he never really considered himself a member of the Rogues. It's an utterly fantastic way to open this issue and transition into the main story. It gives readers a bit of a break from the giant battle taking place to get a closer look at one of the "good guys" in this book.

What this book does brilliantly is changes how the folks of Central City see the Rogues as well as how the reader sees the Rogues. While these guys are villains, they'll do anything to defend the city they love. The closing of this book is incredibly satisfying and makes you want this to keep on going.

Above everything else, this is a delight to read. The issue is a lot of fun and part of that is thanks to Scott Hepburn's art and Nick Filardi's colors. The colors really pop and highlight the art extremely well. The two-page spread, towards the end of the issue is downright amazing. There great flow and movement and it's one killer moment in this issue.

What sucks, and I mean SUCKS, about this issue is that the future of this team is completely unknown. Buccellato put together an incredibly fantastic book and now, it's done and what fans will really want is a solo series of these guys, which will probably never happen.

FOREVER EVIL: ROGUES REBELLION is a tie-in that's not only worthwhile, but a must read for FLASH fans, even if you're not into FOREVER EVIL. Buccellato shines bright when writing these characters. There's a lot of love here for the Rogues, and the ending is what really elevates this team to a whole new level. However, what fans deserve is a series starring these characters written by Buccellato. Regardless of that, I highly recommend this issue and mini-series. 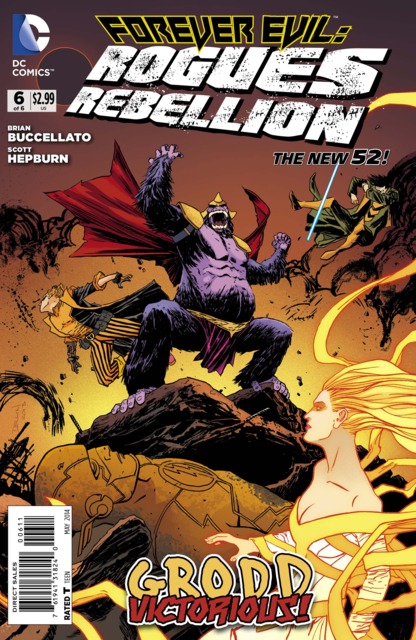