Scarecrow's forces are on venom and ready to take back the city from Bane.

With team Arkham full of venom, you know there's about to be a big ol' brawl. Then again, that's pretty much what the majority of this limited series has been, so that shouldn't be much of a surprise, right?

First and foremost, this FOREVER EVIL tie-in continues to look praiseworthy. Artist Scot Eaton and colorist Andrew Dalhouse do excellent work with bulkier characters, and as expected, this issue is full of them. Bane looks particularly fantastic. The opening splash page of the villain patching himself up has some stunning lighting and the last one is a fine example of how New 52 Bane can pull off a Dark Knight Rises-esque costume (and pose!). I prefer the classic look, but under Eaton's pencil, it most definitely works. The duo also delivers two impressive double spread pages. What goes down isn't all that epic, but they most certainly make sure it all looks great.

Despite being the conclusion of this grand struggle to claim Gotham City, this issue is essentially a dose of popcorn fun and a love letter to Bane. This really shouldn't come as much of a surprise, but you'll have to forgive me for expecting a little more since this is the finale between Bane and Scarecrow's forces and it's been brewing for some time now (Tomasi's done some incredible work over in BATMAN & ROBIN, after all). If you've been enjoying the slugfests and witnessing Bane acting like a towering badass, then you'll be pleased to hear that's basically a vast majority of this issue. There's no surprises to be found here; just some big punches being thrown back and forth.

After so much buildup and potential, this conclusion is literally as simple as it can get and doesn't even give any sort of firm conclusion with the Talons. It'll be an amusing ride for Bane fans, but there's literally zero payoff with Scarecrow. In fact, I imagine a Scarecrow fan or two will be sure to speak their mind in the comments. I mean, for all of the tactical characters involved, it literally wraps up with "let's beat him up!" Don't get me wrong, I obviously love a good fight, but this was basically one big pile on with a couple of impactful moves. There were plenty of possibilities with this roster and it feels like a missed opportunity. The fact the end result is given away in solicitations for an upcoming one-shot doesn't help matters, either. Lastly, I'm not the biggest fan of Bane's dialogue. Sure, he's an intellectual man, but Tomasi tends to make him ramble instead of being concise and intimidating.

Do you like seeing Bane punch things really, really hard? If so, you'll have an okay time with this chapter. However, if you were expecting a huge payoff with the war's ending, you're likely to be letdown because this literally boils down to a big (albeit good looking) match of rock 'em sock 'em robots. It's remarked that Bane's a great tactician, but let's be honest, this book exists just to see some fighting between Batman's villains and the plot itself feels secondary. If that's all you expect or want, then it'll be worth the $2.99. For everyone else, you're probably better off spending that money elsewhere. 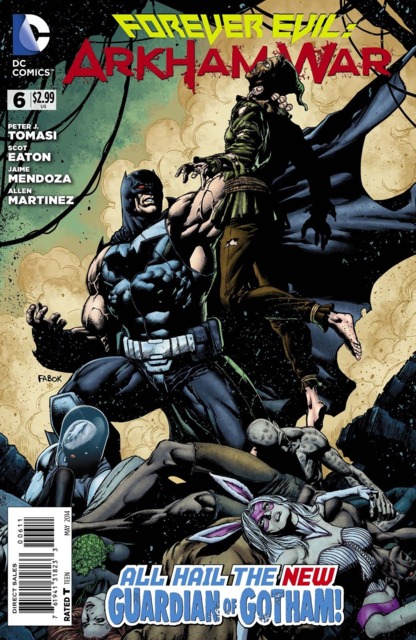