Forever Evil #6 - The Power of Mazahs!

The end is near but answers are revealed in this issue. Plenty of death, betrayal, and revelations inside.

We usually have to wait until the final issue of a story arc before getting the big answers. It turns out, Geoff Johns decided to mix it up a little by giving us some answers right now. There is still one more issue to go but there's plenty that goes on here.

From future solicits, we have a small idea what's to come. It's interesting to know where things will go and seeing them start to develop. Who would've thought we'd see Batman standing next to Lex Luthor, getting ready to attack the Crime Syndicate. We've come a long way to have Batman fighting with this motley crew of villains. They're bad, just not as bad as the Syndicate.

With the end so close, there is the big question of what will happen to Dick Grayson as well as who is the mystery hooded man the Syndicate brought with them from Earth 3? These two questions get answered but there's even more to see.

David Finch must be working overtime to draw all the characters contained here. If you're looking for plenty of characters, fighting, and simple bloody mayhem, you're going to find it here.

There's a lot going on and it makes the pacing in this series feel a little disjointed. Part of it might be the other tie-in issues but we're suddenly getting a lot of action happening at once. The flow in the action in some scenes also felt a little crammed in as we'd jump around from character to character.

I dig Finch's art but every once in a while, some of the characters' looks are a little inconsistent. For example, it seems Catwoman has a tendency to put her goggles on and then slide them up and then put them back on, etc. A couple times some characters had looks on their faces, like Superwoman, and I wasn't sure what was going on in their heads.

There's no denying that this series is changing the face of the New 52 Universe. We know Lex has a big future ahead of him, at least for a little bit, and the Bat Universe will feel some affects as well. Geoff Johns cranks up the action and you can feel it all bubbling towards the final issue as David Finch draws fight scene after fight scene. There's still no telling what will happen next but it's a safe bet you're not going to want to miss it. 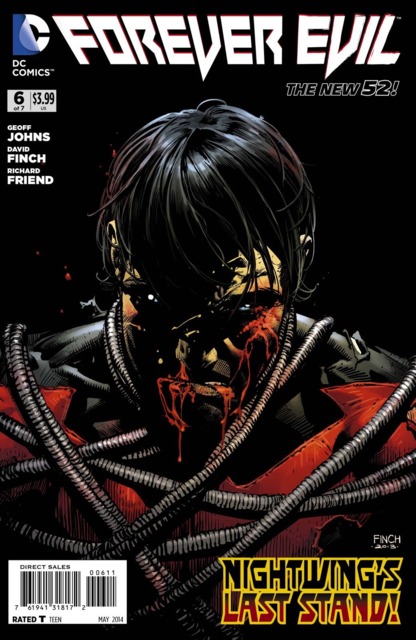